Vodafone’s sale of its 45% stake in Verizon Wireless for £84 billion ($130 billion) – the third-largest M&A deal in corporate history – will leave a £19.4 billion surplus for the UK-based mobile group once its shareholders have enjoyed a lucrative payday. How Vodafone reinvests this income could shape the group’s strategy for many years to come.

Under CEO Vittorio Colao, the divestitures of Vodafone’s minority assets have been well timed. The €8 billion ($10.5 billion) sale in April 2011 of its 44% stake in French mobile operator SFR occurred just prior to Free Mobile entering the French market and sparking a fierce price war. Colao may see similar clouds gathering over the US market. Profit margins could come under pressure now that 4G-LTE networks in the country are widely deployed, and tougher domestic competition is also likely following the Sprint/SoftBank and T-Mobile/MetroPCS mergers. 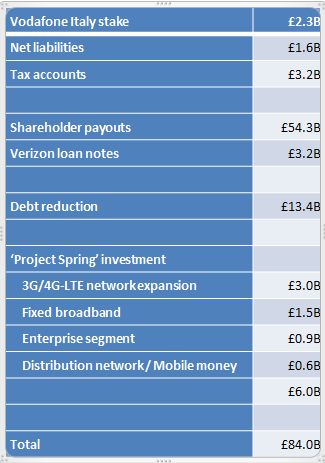 Breakdown of how the £84 billion will be spent
Source: Vodafone

So how will the £84 billion be allocated? A combined £7 billion will go on Vodafone’s purchase of Verizon’s 23% stake in Vodafone Italy, net liabilities and tax payments, followed by a windfall of £54.3 billion for the group’s shareholders and the purchase of Verizon loan notes totalling £3.2 billion. The group has elected to spend £13.4 billion of the £19.4 billion that remains on reducing net debt, which leaves some £6 billion to invest in existing network services and operations.

This £6 billion investment will take the form of ‘Project Spring’, a wide-ranging investment programme that will run over the next three years and accelerate the group’s existing ‘Vodafone 2015’ strategy. The budget for Project Spring contains a £1.5 billion allocation for expansion of Vodafone’s fixed broadband operations, including plans for an extended NGN and VDSL resale deployment, as well as planned investments in the enterprise segment of £900 million and a £600 million upgrade of its distribution networks (including further investment in the M-Pesa mobile payments service in developing markets).

However, half of the Project Spring cash has been earmarked for the acceleration of 4G deployment (as well as greater investment in 3G for emerging markets), with the aim of reaching 90% population coverage in the group’s five main European markets – Germany, Italy, Spain, the Netherlands and the UK – by 2017.

“Now is the right time to step up investment and move ahead of the pack,” Colao explained on a conference call, suggesting that Vodafone has ambitions to become the ‘Verizon of Europe’ by being the leading player in the European 4G market. Colao has made a number of comments in the past hinting that the UK-based group is replicating strategies learned from the US market, with the aim of stimulating mobile data usage and consolidating ARPU.

From a pricing perspective, Colao stated last year that Vodafone was “a bit jealous of [Verizon’s] pricing”. Vodafone has introduced a number of pricing changes since September last year – notably its Red family of plans – which it described as being “very similar to what has happened in the US recently, and we think it’s the right way to address the switch from the old metered world to the new data world”.

Vodafone is acutely aware that 4G success requires aggressive network rollouts to quickly achieve greater population coverage than competitors, and subsequently tie customers in to 12-24 month contract plans before its rivals – a strategy that underpinned Verizon’s successful 4G rollout in the US (we estimate that just over 30% of the operator’s connections are on 4G-LTE as of Q3 2013). Project Spring is clearly aimed at making this a reality across Vodafone’s key European markets, where 4G is still in its infancy and operators are not shy of making comparative adverts to show consumers which one has the best 4G coverage.

According to our estimates, as of Q3 2013 Vodafone is currently the dominant 4G player in Germany (with a 53% 4G market share), Spain (86%), Romania (51%) and Ireland (42%), and also has significant shares of the market in Italy (41%) and Greece (43%). But this additional investment should allow Vodafone to drive 4G adoption right across its European footprint and to differentiate its offering around 4G services. The group showed its intent in this area just last week with the launch of its 4G network in the UK, which offered customers inclusive Spotify Premium or Sky Sports Mobile TV subscriptions to demonstrate the potential of the superfast network.

Further spending on 4G networks and fixed infrastructure will also complement the ongoing quad-play strategy that Vodafone sees as key to offset slowing growth in many of its core markets. Colao believes that bundling fixed-line, internet and TV services alongside mobile will help Vodafone regain market share, reduce churn and boost profit margins. Vodafone recently acquired fixed-line operator Cable and Wireless Worldwide (CWW) in the UK and German cable operator Kabel Deutschland – the latter Vodafone’s largest acquisition since its entry into India in 2007.

4G-LTE makes up just under 1% of Europe’s total connections in Q3 2013, and as such the region is trailing markets such as South Korea (45%) and the USA (20%) by some distance. However, we expect the European 4G market to benefit greatly from Vodafone’s investment, with the resulting increase in competition boosting 4G penetration in the region (as a percentage of total connections) to around 18% by 2017. By this time Vodafone will be ahead of the pack with 22% of the group’s European connections on 4G. 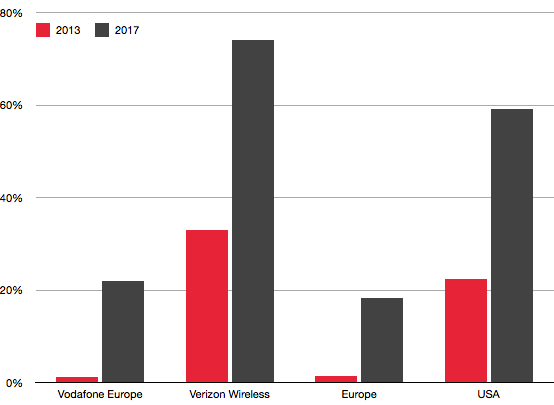