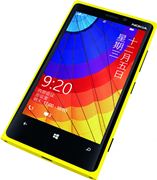 Nokia has been on the receiving end of criticism for not having a “big screen” phone in its range, with observers dwelling on the fact that the company has missed out on important trends previously.

The company’s Lumia smartphone portfolio currently tops-out with the 4.5-inch display on the Lumia 920. Contrastingly, Samsung’s flagship Galaxy S4 has a 5-inch screen – although Apple’s iPhone also bucks the trend, with its 4-inch display.

Bloomberg noted that while small-screen device owners are often able to supplement their device with a tablet, Nokia is also absent from this product category. It is also not present in the “phablet” category which, while seeing plenty of support from manufacturers, is still a niche.

While still the number one handset maker globally, Nokia was criticised for ignoring the market for clamshell feature phones during the early part of the last decade, at a time when Motorola’s Razr was at the peak of its success.

And the company was also slow to release touchscreen devices after the launch of Apple’s iPhone, with its Symbian OS smartphone platform largely unsuited to such devices – certainly in its early efforts.

According to a Bloomberg report late last year, HTC shelved a large screen Windows Phone device, because the screen resolutions supported would have compared poorly with rival Android smartphones.

This means that until Microsoft releases a version of the OS with full HD support, Nokia will also be unable to offer a compelling large display device.

Previous ArticleSix per cent of smartphone users make purchases via device – survey
Next ArticleReport: Nexus 7 update in the works