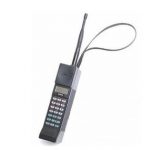 Hard to believe, but this year marks the 32nd edition of Mobile World Congress (in its various guises). Back at the first event in 1987 the flagship gadget to own was Nokia’s Cityman 1320 (pictured, right), the Finnish company’s entry into the portable phone market, which weighed in at a whole kilogram and ran on the now obsolete TACS network.

Few would have imagined this event could become the behemoth it is today: a show which attracts more than 108,000 attendees, over 2,300 companies, occupies a whopping 120,000 square metres of exhibition and hospitality space, and boasts an economic impact of nearly half a billion euros.

And it’s an event that has developed so far beyond its early beach days in Cannes (and even earlier days of business hotels in Madrid and other European cities) that it’s grown to a size capable of supporting its own five-day television channel.

The Mobile World Live team has spent the last few weeks planning for our biggest broadcast yet. In fact you’ll be able to watch Mobile World Live TV in more than 28,000 hotel rooms across Barcelona (a 7 per cent jump on 2017) and on around 100 big screens throughout the venue. Of course, we will also stream live to www.mobileworldlive.com and the event app.

Our goal is simple – we want to bring the excitement of the show to wherever you are. We’ll do that by showcasing every device launch, streaming every keynote session, discussing every major topic in our live studio panels and interviewing (almost) every big hitter in the industry.

Firsts
And that’s not all. For 2018 we are boosting our programme schedule with the addition of some great new features.

For the first time we’ll provide extensive highlights of the 4YFN event, held at Fira Montjuic and designed to connect the most innovative start-ups with potential investors. Expert tech presenter David McClelland will be our host for daily insights into the world of start-ups, as he pounds every inch of the showfloor’s 8,600 square metres and covers every hot topic.

In another first, the world of Formula 1 is arriving at MWC with its own dedicated exhibitor area. Thanks to the magic of 4G technology, Mobile World Live TV will broadcast live from the 450 square-metre stand where we’ll be hoping to bump into some rather fast and famous faces.

Aside from the new elements, Mobile World Live TV’s familiar faces are also back. Host Sasha Twining will be joined throughout the week by GLOMO Awards presenters Suzi Perry and Ortis Deley, and the entire team of Mobile World Live reporters will be hitting the screen to bring in-depth analysis and commentary to the broadcast.

We’ll see you live from 4.30pm CET on Sunday 25 February. Enjoy the show – in every sense of the word.