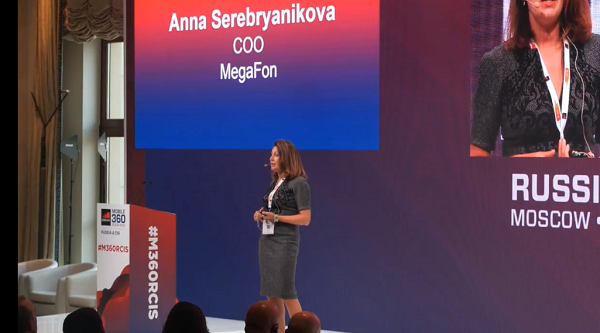 LIVE FROM GSMA MOBILE 360 SERIES – RUSSIA & CIS, MOSCOW: Anna Serebryanikova, COO of Megafon (pictured), called on Russia’s government to encourage cooperation among all players to ensure the industry can successfully address problems surrounding 5G deployments, which include a lack of spectrum.

“It is not accidental that 5G use cases have to do with the shared economy, they are vertical partnerships…the only way to achieve efficiency is through partnership with the industry internet players, device makers and so on,” she said.

“We shouldn’t be afraid that 5G networks may, and will, be built on sharing principles,” she stated, adding backing from regulators is crucial.

Serebryanikova went on to say that without cooperation “Russia will face a dilemma between creating a sole operator or just let everyone do what they want and see what happens”. The solution to this, in her mind, is to reach a compromise and find a way to move forward together.

On a more positive note, she said Russia is a unique market with a large number of national players and that it must “use that competitive edge”

When it comes to IoT, the COO said there is a need to “strengthen and intensify” dialogue, otherwise “we will be playing with fire”.

Kazakhtelecom
On the topic of 5G in Kazakhstan, Kazakhtelecom chairman Kuanyshbek Yessekeyev said he does not expect growth to be comparable to 4G services as the country has a low population density.

However, he stated “we are interested in 5G and IoT…we are the national operator for the transit of fiscal data and many other fiscal tasks…and this is going to develop”.