Targeting 100M mobile users across the Congolese and Sudanese markets

More than 120 million people live in the two Congolese and two Sudanese markets in total, spread across more than 5 million square kilometres. However, less than a quarter of the population (30.2 million) in those four countries had subscribed to a mobile service by the end of 2012, according to Wireless Intelligence data. Unique mobile subscriber penetration in Q4 2012 was calculated at 17% on average in the Democratic Republic of Congo (DRC) and South Sudan, and at 40% in the Republic of Congo and the Republic of Sudan. The African average was 33%.

What is inhibiting mobile growth in markets with such a large potential demand? And what is driving the gulf in mobile penetration between the Congo and the DRC, and between Sudan and South Sudan? Connecting 100 million mobile customers across the four countries is an ambitious target, but one that operators and regulators can achieve with the right amount of public and private investment.

We believe the disparity is rooted in three factors – poverty, low road density and poor access to electricity – all of which hinder economic development and mobile adoption, and which are considerably more prevalent in the DRC and South Sudan than in their respective neighbours. Moreover, there have been numerous conflicts and wars in the region over the last decade, which have often had a debilitating effect on local infrastructure and economies.

According to the latest World Bank figures, the DRC is the poorest country of the four with more than 70% of the population living below the poverty line compared to just under half on average for the other three markets. In 2011 GDP per capita stood at $231 in the DRC, around 15 times lower than that of the Republic of Congo. In contrast Sudan and South Sudan have similar GDP per capita at around $1,800. Given a monthly subscriber ARPU of around $6, it follows that the average mobile user in the DRC spends a considerably higher proportion of their income on mobile access than the 3-5% observed in other developing markets and the <1% in the US and Europe.

Cost-conscious consumers in these markets are looking for the most affordable mobile tariffs and devices, with 99% of connections in all four countries on prepaid plans. According to Millicom’s local team in the DRC, low cost handsets are a prerequisite to faster mobile adoption adding that “the import tax on devices (42%) is a blocking point for penetration as it favours grey market and limits willingness of operators to subsidise phones”. In addition, voice retail prices are regulated in the DRC (floor price of on-net tariffs) and promotions are not permitted, which is “limiting the competitiveness of operators in the [customer] acquisition process” and hampering their efforts to manage price elasticity.

Millicom explained that in the DRC, “the smartphone market is very small in absolute numbers” and that it predominantly targets “high-net-worth clients who are mainly senior executives in multinationals, NGOs, private sector” along with “upwardly mobile young professionals (25-40 year olds)”. Similarly, Zain noted that “basic mobile voice telephony remains the key component of the telecom sector in Sudan and South Sudan. Illiteracy is a major obstacle to smartphone adoption in both countries, with residents in South Sudan often scattered over vast areas that have not witnessed any real economic development”.

The lack of infrastructure and low road density has negatively affected network coverage expansion in several African countries, with minimal levels of urbanisation corresponding directly to low subscriber penetration figures (see graph). According to the World Bank, levels of road density in the DRC and South Sudan are among the lowest in the region, with only four out of ten provincial capitals in the DRC linked by road to the national capital, Kinshasa. Millicom told us that “the cost of doing business is high due to inaccessibility of other regions by road” which according to the operator explains why “consumer prices are very high” and are therefore putting increasing “pressure on share of wallet for mobile services”. 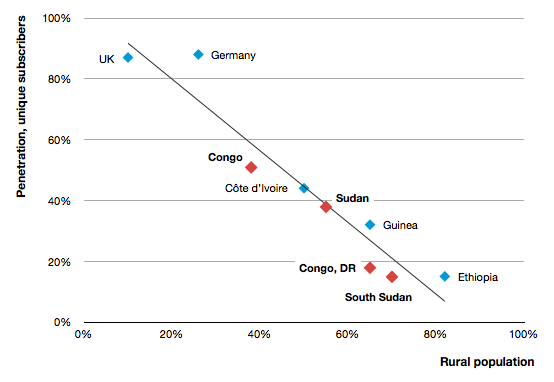 According to the World Bank, the Kinshasa–Brazzaville conurbation (the neighbouring capitals of the DRC and Congo, respectively) is projected to become Africa’s largest urban area by 2025. The economic relations between the two Congos depend on the link between the two capitals. However, despite their proximity, formal economic exchanges between the two cities are extremely limited leading to significant differences in retail prices.

Meanwhile, Zain explained that “the vast geographic landscape of Sudan makes it difficult for operating companies to roll-out mobile networks across the entire territories, and in many areas (like South Kordofan), residents are nomad Arabs who move from one area to another with their cattle. Hence it is challenging to provide services for such mobile users and initiate corporate social responsibility projects for them”.

According to the most recent International Energy Agency (2009) data sourced in Mobile for Development Intelligence, close to 40% of the population in Congo and Sudan have access to electricity, compared to just above 10% in the DRC and around 1% in South Sudan. This is largely because the DRC and South Sudan are vast countries with most of their populations living in rural areas, where electrification rates are less than half those in cities.

The market characteristics described above present some of the challenges that mobile operators and regulators in these countries need to address in order to reduce the cost of ownership of mobile phones and increase network coverage. Operators generated a combined $3.1 billion in sales in the four countries last year, representing 5% of total operator revenue in Africa. Excluding Sudan (which has been affected by a price war), mobile revenue growth in these markets has outpaced the rest of Africa (19% vs. 8% in 2012), driven by sustained subscriber growth. However, this growth has an implicit limit in that once cities are saturated, rural areas become the next frontier, meaning more attention needs to be given to the Congolese and Sudanese markets to incentivise network investments. 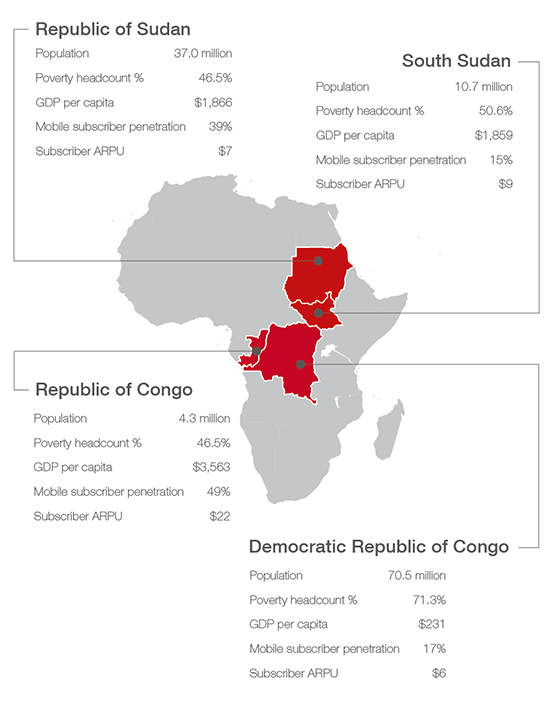 Half a billion Chinese citizens have subscribed to the mobile internet