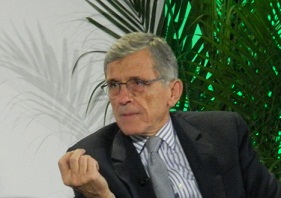 FCC chairman Tom Wheeler (pictured), facing accusations from Republican lawmakers that he crumbled under White House pressure to enforce stricter net neutrality rules, conceded that President Obama’s statement calling for re-classification of broadband providers as utilities was indeed an influence, but only insofar as financial markets weren’t spooked by the prospect of tougher legislation.

President Obama, in November, had urged a so-called Title II utility approach to broadband providers, while Wheeler had appeared previously not to favour resurrecting ‘depression era’ legislation from the 1930s, preferring instead a much lighter touch.

Much to the chagrin of many Republicans, however, the Democratic FCC chairman seemed to change his mind following the president’s intervention. Some accused him of being “blindsided” by the White House.

In his appearance in front of the House Oversight and Government Reform Committee, Wheeler insisted the White House gave “no secret instructions” on net neutrality rules.

He argued that the lack of market reaction to Obama’s statement was instead an influence in his thinking, as was the willingness of companies to spend nearly $45 billion on AWS-3 spectrum.

In his defence of tougher net neutrality rules at this year’s Mobile World Congress, Wheeler argued that operators would not be put off from investing by net neutrality rules, pointing out that AWS-3 airwaves had ‘open internet’ conditions attached to them.

“The President’s focus on Title II put wind in the sails of everyone looking for strong open Internet protections,” Wheeler said at the committee hearing, quoted by the Wall Street Journal.

Just prior to MWC 2015, a 3-2 vote by FCC commissioners – split down party lines – saw broadband internet service providers regulated under Title II of the Communications Act.

The FCC now has the legal authority, in cases where it sees fit, to ban providers from blocking, throttling or offering paid prioritisation.

And mobile operators fall squarely under the new regulation. While the FCC’s 2010 open internet rules had “limited applicability” to mobile broadband, the new rules will fully apply to the mobile industry.

On publication of the FCC’s 400-page document on net neutrality rules, Republican commissioner Ajit Pai accused the US regulator of “turning its back on internet freedom”, although Wheeler was at pains to stress at MWC that Title II had been modernised. “This is about as far as you can get from old school regulation,” he said.

Previous ArticleFacebook users can soon use Messenger to send money
Next ArticleCyanogen lines up $110M in funding, has bigger plans