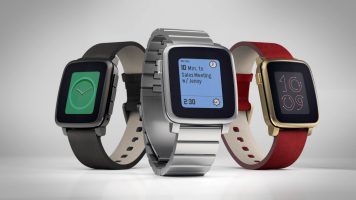 Pebble is stepping up its product rollout, with the manufacturer using Mobile World Congress (MWC) to announce its second product launch in a week, plus what it claims is the sector’s first “hardware accessory platform” that lets sensor manufacturers build “smart straps” that can communicate with smartwatches.

The smartwatch manufacturer revealed that it has extended its Pebble Time series, with the addition of Pebble Time Steel (pictured), a device unveiled by Pebble CEO Eric Migicovsky during an MWC conference session focusing on Wearables that took place on Tuesday.

Pebble Time Steel is available on Kickstarter – a crowdfunding platform where users ‘pledge’ funds to a project up until they have reached their target – for $250, and is the second such device it has made public in a week.

The latest update has up to 10 days of battery life and is manufactured with stainless steel, plus optional leather, or steel straps, with the device to start shipping in July. Migicovsky also said updates are available to those that had ‘pledged’ to the previously announced Time device.

These “smart straps”, as Migicovsky calls them, signify a significant milestone for the industry vertical, as it is the first time such a service has been made on wearable devices.

He added: “Pebble is no longer just an accessory to your phone, it is its own unique computing device,” he said.

The new hardware platform is “open”, meaning all developers, or “hackers”, are able to build on top of it, and then make device accessories equipped with functions such as GPS tracking that can be attached directly to a Pebble device.

“We believe that in the future sensor manufacturers will not have to create their own smartwatches just to bring their sensors to market. They can integrate them into a thriving and active community of people that want to see their smartwatch do more,” he told attendees.

Migicovsky also said he believed smartwatches will become indispensable to consumers, but did concede that this was unlikely to “happen overnight”, although he did express his opinion that such devices could exceed smartphones in terms of popularity in the long-run.

“With smartwatches now, you can start to get things done from your wrist, without having to take your phone out… It’s about not forcing the user to change their habits around the device,” he added.