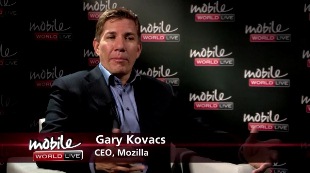 VIDEO INTERVIEW: Mozilla’s fledgling Firefox OS is “still at the crawl stage”, despite strong support from a raft of operators and handset vendors, Gary Kovacs, CEO of the company, told Mobile World Live in an exclusive video interview.

Speaking at Mobile World Congress last month, the executive said that with “big sets of commitments” from operators, shipment volumes “in the many tens of millions” are on the cards. “What that translates to in market share I don’t know, but we have to crawl, walk, run, and we’re still at the crawl stage. This is still very early, but definitely exciting,” he said.

Kovacs said that the work is about offering “mid-tier smartphone functionality and performance at about a high feature phone price,” targeting “the next two billion coming on line that don’t look and act the same as we’d expect in the western world, because they just don’t have the economic resources.”

The executive also noted that in bringing Firefox OS toward launch, “we have learned that the mobile world doesn’t exactly play well together”.