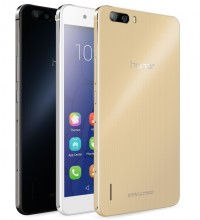 Ambitious smartphone brand Honor announced two new products targeting its market of “digital natives”, including a device with camera technology it hopes will set it apart from rivals.

The company also said that the 5.5-inch full-HD screen has a 78.2 per cent screen-to-body ratio, compared with 71.1 per cent for Apple’s iPhone 6 Plus. Other features include an 8MP front camera, with Honor hailing it as “the best selfie phone in the industry as of today” at its press event.

Also unveiled was Honor’s 4X, which is the “first Honor 4G smartphone with dual 64-bit software and hardware”. It delivers a “strong and stable 4G network connection” which reduces the chance of fall-back to 3G.

It also has 13MP rear and 5MP front cameras, with dual-SIM, and 5.5-inch screen.

Honor, which is being positioned as an independent brand by parent Huawei, noted the advantages of being part of a bigger group during its press conference.

Frank Yao, founder and MD of Honor Western Europe, said that “we benefit from that – it allows us to invest heavily” in building the brand.

But he also noted that the devices have a strong European flavour, alongside its Chinese heritage.

While Honor has focused on direct-to-consumer sales, it also this week announced an “exclusive network tariff partnership” with 3 UK, for Honor 6+.

With the brand having been promoted heavily in Europe since late last year, it was also noted that the company still has greater plans. This includes a launch into the US market later in 2015.