App users who opt-in to receive push notifications show significantly higher engagement and retention, according to research by Localytics.

The analytics and marketing firm found that push-enabled app users demonstrated engagement that was 88 per cent higher than those that don’t receive notifications. According to Localytics, around 52 per cent of app users opt-in.

With the ability to segment push notifications, users receive content that is likely to appeal to them based on their behaviour and preferences, encouraging them to re-engage with the app in question.

The company suggested this is because well-timed and tailored push messages about items previously viewed by users are highly likely to tempt them back into the app.

In addition, the retention rate of users that had push notifications enabled was higher than for those that did not. 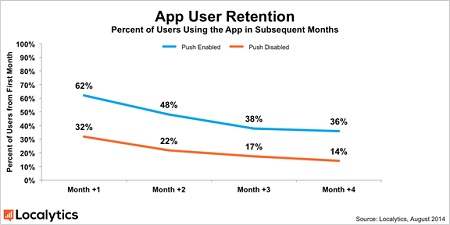 The difference is even more noticeable after four months, when a third of push-enabled users are still engaging with an app, compared with 14 per cent of non-push enabled users.

The proportion of users accessing an app just once fell from 21 per cent to 11 per cent when push notifications were used.