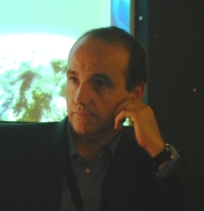 LIVE FROM APPS WORLD LONDON: There were mixed opinions this morning as to whether operators should operate their own app stores, with executives from Qtel and Telefonica Digital highlighting the benefits of different approaches to the market. The primary issue revolves around the role a store can play in the operator portfolio, including whether the benefits available outweigh the costs and the potential pitfalls – especially against a backdrop of already fierce competition in this market.

Eric Morhenn, Director of Strategic Partnerships and Devices for Qtel International, argued that “most operators should not build and operate their own app store. The kind of conventional wisdom for some operators is that we are becoming a dumb pipe, voice revenue is going down, data has become a commodity. We’ve got to do something, let’s go out and build an app store. I think for most operators in most cases, that’s not the right answer.”

He gave three reasons why operators should think carefully before launching an app store.

Firstly, “there are already a lot of great app stores out there, and we don’t need more.” Morhenn said the operator comes late to an already crowded market, where many of the existing stores have already created significant customer loyalty.

Secondly, from a commercial viewpoint, the cost of building and operating an operator app store “will never really match the revenue potential for an operator.” He noted that the income from apps is shared between many parties, and that there is also a prevalence of free products, making this less appealing from a business viewpoint.

Finally, Morhenn highlighted that “there is a risk for operators from apps going through the store,” for example if apps are infected with viruses, spamware or malware, which would lead to “a very bad customer experience.”

Lorente reiterated the fact that Apple does not make a profit from its App Store business, despite its scale. He noted that the expense for adding an app to the store is “around US$3,000 on average, and you known that most of the applications will never, ever make US$3,000.” Instead, Apple makes money on hardware, while Google monetise its efforts through advertising.

While highlighting the strengths operators have, such as the ability to create “boutique” stores, exploit customer recommendations and personalisation, and build on existing billing relationships, Lorente also noted that there are significant challenges ahead. “If you ask me if operators are doing well now, I would say not so much. We are looking for a spot,” he said.

Also participating in the debate, Dan Hod, Business Manager for Amdocs, broadly agreed with the Qtel viewpoint, stating that: “we see very few big operator giants creating their app stores, but most of them are trying to think of more creative ways to cooperate.”

Andrew Darling, Associate Director of Market Development EMEA for OpenMarket, noted that away from app stores, there is significant potential for operators to play a role in the industry. Highlighting the fact that operators have access to a significant amount of customer usage data, he argued that “the operators have a lot of keys to help app publishers unlock the secrets to generating more usage, more consumption, by exposing APIs which can really help both parties.”