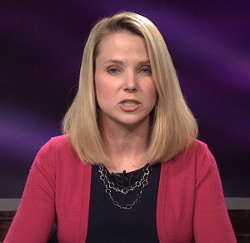 Speaking in the company’s second quarter results call, Yahoo CEO Marissa Mayer (pictured) put the focus firmly on its progress in mobile (potentially an effort to detract attention from overall falls in revenue and income). “This growth, combined with the launch of Gemini, our mobile search and native marketplace, has positioned us to monetise our mobile traffic in a smart, sustainable way that supports long term growth,” she claimed.

The number of mobile users has more than doubled compared with two years ago, and has grown 36 per cent over the past year.

“In addition to driving user growth, mobile has also delivered a step change in engagement,” Mayer added, stating that the time spent on mobile has risen by 79 per cent year-on-year.

And the company’s focus on mobile apps, with more than 400 employees developing iOS and Android apps, has paid off according to Mayer, with smartphone users spending 86 per cent of their time interacting with Yahoo technology on apps.

The Yahoo CEO said the growth was the result of recruiting new technical talent over the past few years, something that “will continue to be a point of focus and investment”.

Mayer said the company’s mobile products “were noticeably scattershot” two years ago, but sunsetting more than 60 products and services and redirecting resources to services that will drive revenue has improved focus.

Noticeable mobile successes in Q2 included the launch of the Aviate homescreen app, which saw user numbers grow 2.5 times during the first week of availability, with those accessing the technology doing so an average of 50 times per day.

“We’re excited about the opportunity to deliver the right information and applications at the very moment of relevance,” Mayer noted.

The new Yahoo Mail app, released during the quarter, added search, news and content, leading to iOS users spending an additional one minute per day using the app compared to its predecessor, and a 65 per cent increase on Android.

“Developed in under six weeks, our latest Mail app is yet another testament to the abilities of our teams to be mobile first, move fast and launch products our users love,” Mayer said.

Mayer also talked up progress with the Gemini marketplace, “the very first unified mobile search and native buying platform in the industry”. The company is now serving its own mobile search ads in the US for the first time since 2010, with Gemini accounting for 50 per cent of mobile display revenue in the US.

Both mobile display and search revenue have grown more than 100 per cent year-on-year.

Despite the success on the mobile side, Yahoo saw a 3 per cent year-on-year decline in revenue in the second quarter to post sales of $1.04 billion. In addition, it saw a 72 per cent drop in GAAP income from operations to $38 million.

Mayer said “given our top priority of long-term sustainable growth, we are not satisfied with our results this past quarter,” adding that the transformation of the company will take “multiple years,” with some quarters being more challenging than others.

Fraudsters cash in on Covid-19 with app malware