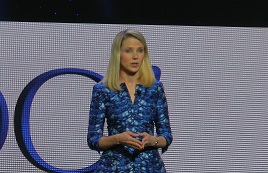 LIVE FROM CES 2014: Marissa Mayer, CEO of Yahoo, declared mobile a “key part of Yahoo’s future”, in a keynote presentation which also saw a mobile-related acquisition announced and a new app unveiled.

Late last year, the media company passed more than 400 million mobile users (excluding those using its Tumblr service), around half of the 800 million total monthly users for Yahoo’s core sites.

“It’s no secret that we are amidst a massive and continuing platform shift to mobile,” she said. “Mobile takes the things that Yahoo has excelled at for almost 19 years – mail, finance, news – and puts them directly in your pocket. And for Yahoo and our industry, mobile is all about growth.”

“This shift is not just about the proliferation of mobile devices. It’s also about how much time we are spending on our phones, which has increased five times over in the last three years,” the executive continued.

In the keynote, Mayer revealed Yahoo’s acquisition of Aviate, a company which offers technology that uses contextual information – such as WiFi connection, GPS, accelerometer data or time – to provide users with access to the most relevant apps and information.

The company plans to make Aviate’s technology “a central part of its Android-based experiences in 2014 and beyond”, and will continue to develop the product. Aviate is currently in a private beta.

And she unveiled Yahoo News Digest for iPhone and iPod Touch, which was built using “insights” from Summly, which it acquired last year.

The app provides customers with two daily digests of news, which are “algorithmically produced, but editorially curated”. Users are also provided units of information tagged “Atoms”, which provide additional context, such as maps, infographics, videos or photos.