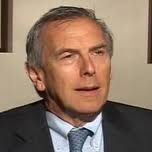 Vodafone is exporting M-Pesa to India with its launch of a mobile money service in partnership with the country’s ICICI Bank.

After running a trial, the partners will launch M-Pesa in eastern parts of India including Kolkata, West Bengal, Bihar and Jharkhand, with a population of about 220 million.

Vodafone said the plan is to extend the service across the rest of the country in a phased approach.

ICICI Bank is described as being the country’s largest private sector bank.

The service, which will be offered through 8,300 agents, includes the ability for users to transfer money to family and friends via mobile phones, as well as pay money into any bank account in India.

The companies are also trying to convince the Indian government to use the service for making benefit payments, for instance to the rural poor.

Marten Pieters (pictured), Managing Director and CEO of Vodafone India, described the mobile phone as “a bank account, a front door to a micro-business or a lifeline to people in the remotest areas”.

Vodafone said in November it planned to launch an M-Pesa service in partnership with ICICI Bank. At the time, it said the service would launch before the end of 2012, so the current deployment has been delayed.

The operator is already working with another Indian bank, HDFC Bank, offering mobile money services in the state of Rajasthan. The service was launched at the end of 2011 and was billed at the time as the first stage of a national rollout. It was called M-Paisa rather than M-Pesa but offered similar services to the current launch.

Elsewhere, M-Pesa is available in eight countries, most famously in Kenya where it is offered by Safaricom under licence from Vodafone which owns the concept. Vodafone is also a Safaricom shareholder.

Most recently, Vodafone said it would offer M-Pesa in Myanmar if its joint bid for a mobile licence in the country with China Mobile is successful.