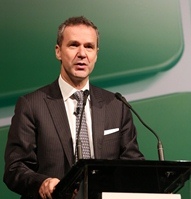 LIVE FROM GSMA MOBILE 360-MIDDLE EAST: Anders Lindblad (pictured), president of the Middle East and East Africa region for equipment vendor Ericsson, highlighted some of the attributes of worldwide mobile operators who have been able to outpace their rivals in terms of growth.

The executive said that some leading companies can be set apart by the fact that they make strategic investments – for example in-building or public transport coverage – to give them a differentiation point that is “very difficult for a competitor to copy quickly”.

Market leaders also adopt “user centric” performance measurement metrics, such as monitoring the performance of key apps across the network, in order to assess the quality of services delivered to consumers. “It’s not just doing drive-testing”, he said.

Another differentiator is that the front-running operators showcase real-world benefits for users in their marketing efforts. “People don’t really understand if you say you have 2Mbit/s or 8Mbit/s throughput or you have 98 per cent coverage – you need to make these ideas relevant”, Lindblad said.

Building ecosystems is another potential strength, although this is no simple matter. “It’s not just talking about ecosystems. It’s establishing some form of farming ground where you work together with other professionals and segments and you bundle them in together with a technology platform,” he said.

Enhanced partnerships also reap rewards, with Lindblad stating that operators should “adjust portfolio, segments and revenue streams proactively”. This means working with partners for shared initiatives, with the example of AT&T’s alliance with General Motors in the automotive space cited.

And perhaps causing the most disruption for operators, the executive suggested that tariffs should be “unboxed”, to match packages with the consumption of consumers. The example given was Verizon Wireless’ tariffs for the US market, which are tiered based on data allowances, rather than putting voice and text front-and-centre.

“The problem here is that voice and SMS are the cash cows. It’s very hard to go to the board and say ‘I’m going to give voice and SMS for free’. But in the long term it is the data that will prevail,” he said.

AT&T to launch VoLTE, HD voice on 23 May