RIM launched the first devices powered by its long-anticipated BlackBerry 10 platform at a multi-national launch event this afternoon, at the same time announcing it is dropping the ‘Research In Motion’ moniker.

“We have re-invented this company, and we wanted to reflect this in our brand,” said CEO Thorsten Heins. The firm will now be known simply as ‘BlackBerry’. 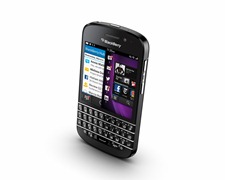 “We know there are a lot of physical keyboard lovers out there,” Heins said.

Many of the key features of BlackBerry 10 have already been demonstrated at various events, although some features have been updated as the devices reach the market.

At the heart of the new OS is the BlackBerry Hub, an integrated contacts and social networking app with support for Facebook, Twitter and LinkedIn.

Messages and updates can be read and posted without the need to leave BlackBerry Hub, and contact information can be viewed regardless of the app in which it is stored.

It also supports the BlackBerry Balance feature, which enables users to switch between private and work profiles, with the ability to run both personal and work apps at the same time while keeping corporate data secure and encrypted.

The company’s BBM messenger service has also gained support for voice and video calls, and enables users to share screens in real-time.

Supporting the new devices is a refreshed BlackBerry World store, which includes a range of music and video as well as apps. “Nobody will feel they are lacking in content and applications on BlackBerry 10,” said Marty Mallick, VP of global alliance and business development at the company.

With RIM – or BlackBerry, as it will be – having spent a significant amount of time courting developers in the past 12 months, Mallick said that it launches with “more apps by far than any first-generation operating system” – more than 70,000 are already available to support the launch of the first BB10 devices.

“We have worked with partners to offer the best services,” Heins said, also stating that it has been working “more strategically” with developers to bring the most popular applications to BlackBerry.

According to Heins, the devices will have cleared testing with 110 operators by the end of February 2013, although some markets are more advanced than others, with the Z10 leading the way ahead of the Q10.

The first market to see launches is the UK, with Z10 availability scheduled for tomorrow, with debuts in Canada and UAE early in February.

The ‘big four’ US operators – Verizon Wireless, AT&T, T-Mobile and Sprint – are set to offer BlackBerry 10 devices in March.

While pricing is likely to vary by market, Heins said the Z10 will be priced at $149 with a “three year contract” – UK pricing is around £50 with a £40 two-year service contract.

With the new devices finally on the market, Heins acknowledged that the company’s success with consumers is not assured. “Today is not the finish line. It is the starting line,” he noted.