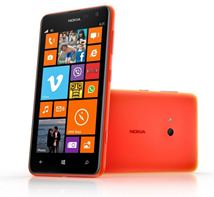 Nokia announced its largest-screened Windows Phone device to date, Lumia 625, which has a 4.7-inch display.

The smartphone will enable the company to better compete against large-screen devices from its rivals, although 4.7-inches is still smaller than the flagship smartphones of vendors such as Samsung (Galaxy S4, 5-inch) and Sony (Xperia Z, 5-inch).

But the vendor is not positioning Lumia 625 as a flagship: it is instead described as “an accessibly priced 4G smartphone”.

Compared with many rival devices, the 800×480 pixel, 201 pixel-per-inch resolution of the Lumia 625 is uninspiring.

It has previously been suggested that Nokia is hamstrung by limitations imposed by the Windows Phone platform, which is currently unable to support HD displays – unlike the Android platform used by rivals.

In terms of specifications, Lumia 625 is mid-tier. It is powered by a 1.2GHz dual core processor, has just 512MB of RAM, and includes a 5MP main camera.

Lumia 625 will be available in various colours including orange, yellow, bright green, white and black, with an “array of changeable shells enabling easy personalisation”.

With an estimated retail price of €220 before taxes and subsidies, it is scheduled for availability in China, Europe, Asia Pacific, India, Middle East, Africa and Latin America in Q3.