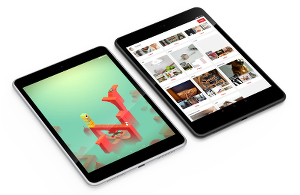 Nokia announced the N1 Android tablet, the first device to be developed under a brand licensing agreement since the sale of its Device & Services unit to Microsoft was completed earlier this year.

The N1 will be manufactured and distributed by an OEM (reported to be Foxconn) and will initially be made available in China in the first quarter of 2015. It will be priced at $249 and there are plans to expand availability to other markets.

The Nokia brand, industrial design, Z Launcher software layer and IP will be licensed to the OEM by Nokia Technologies on a running royalty basis.

Ian Fogg, director of mobile analysis at IHS Technology, described the launch of the N1 as “an audacious move” which goes “far beyond” a brand license play.

The advantages of licensing are “considerable”, according to Fogg, as it enables Nokia to re-enter the mobile device market without having to concern itself with manufacturing, supply chain management, stock control and hardware distribution.

The analyst said the choice of customers for Nokia’s licensing is the biggest risk to the strategy: “It will need to strike a balance between how best to maximise the commercial return for Nokia and ensuring the products meet the quality standards Nokia wishes to set.”

At its Capital Markets day last week, Nokia suggested it could license the brand to third party smartphone vendors from late 2016, meaning it could potentially return to the smartphone space.

The brand licensing would exclude featurephones as Microsoft has a deal in place to use the Nokia brand on such devices over a ten-year period.

As the N1 announcement confirms, Nokia can already license its brand for other types of consumer electronic devices, such as tablets.

Although the company could look to create its own devices unit again, it seems more likely it will work with device manufacturers such as Compal or Foxconn, which already have the capabilities to deliver products to market, but lack their own brand presence.

The N1 has been designed by Nokia and features the Nokia Z Launcher interface, which enables users to scribble a few letters to find content, and which over time predicts what applications users will want based on the time of day and location.

The OEM partner will be responsible for business execution, including engineering, sales, customer care (including liabilities and warranty costs) and software licensing with third parties.