Industry on road to autonomous cars 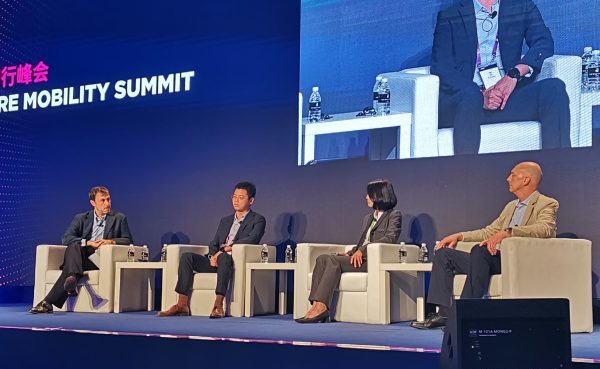 LIVE FROM MWC19 SHANGHAI: Work being done now in the automotive and mobile industries is paving the way for fully autonomous driving, a panel of executives said.

Ericsson’s Harry Qiao (pictured, second left), who focuses on connected vehicles in China for the vendor, said: “The automotive industry is seeing its biggest transformation in a generation. I think that there are four main drivers: connectivity, autonomy, redefined business models and electrification. Connectivity is very important.”

“We can see that nowadays our LTE network performance is not good enough to support autonomous driving. 5G has the potential to resolve this kind of situation, especially with its low latency feature,” he continued.

Christin Lin, general manager of antenna specialist Taoglas China (pictured, second right), said current pilots are vital in gaining information to power future deployments. “Testing is really important. Because by doing a lot of testing, you will be able to collect data under different circumstances.”

This sentiment was echoed by Paul Washicko, SVP at telematics company CalAmp (pictured, right). “I think right now we’re in a data collection phase, we have a lot of different companies throwing a lot of money at collecting data. You have to collect a large amount of data both in a controlled environment and also on actual roads in order to be able to let the machines actually learn and do the artificial intelligence processing to be able to make this happen,” he said.

Intricate
Due to the numerous moving parts involved in autonomous driving – from changes to the vehicle to differences in the way data is processed, and high-tech cars existing alongside legacy vehicles – complexity was a common theme.

“The complexity of the engineering, design and manufacturing is challenging when we want 100 per cent accuracy. Another issue I think we are facing is the cost, because of the complexity, all the devices, all the components must co-exist together, to function 100 per cent,” Lin said.

On the same theme, Washicko observed: “From a systems perspective, how much processing do you do need at the edge? How much do you need to do in the vehicle? And how much data do you need to have a comfort level that the AI is performing well enough to be able to provide safe driving of these autonomous vehicles and keep everybody on the road safe?”

He continued: “There’s going to be different parts of the world at different stages of the evolutions of networks, so how do we deal with that? How do we deal with older vehicles? In the US alone, we have over 200 million vehicles on the road. They have no tech. They are not connected. How do you deal with those? Do you mandate beacons in those, is this a government/private enterprise combination to make sure the vehicles interact including the older vehicles?”

Lin also noted data processing will move closer to the vehicle itself: “Now it’s in the cloud, but eventually it will need to be on the device because we cannot allow any problems, it must be real-time.”

Starters
In terms of the journey to autonomy, “I think that we can have semi-autonomous going on right now, for testing and to get the data until we are fully ready,” she said.

Qiao said autonomy will first be adopted in fleet mobility scenarios, such as with online taxi outfits Didi and Uber.

And Washicko pointed to long-haul trucking in the US as an early adopter. “Those are going to be on very specific routes, a step-by-step process, with these very routine routes that are run continuously,” he said.