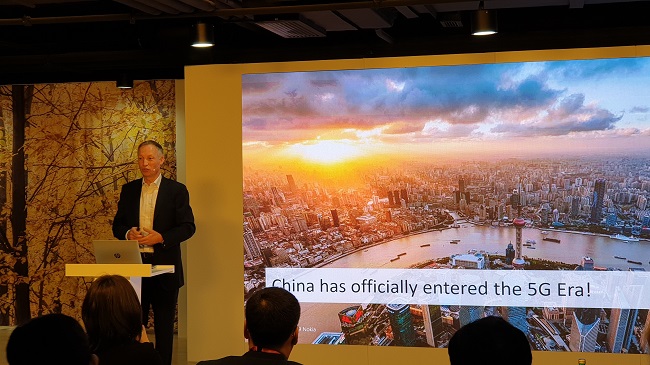 PARTNER FEATURE: Nokia’s end-to-end network capabilities and enterprise expertise give it competitive edge over international rivals in the networks market, the company stated, as it continues to strengthen its commercial position in 5G.

This, it explained at an analyst event during MWC Shanghai, is already delivering rewards. Markus Borchert, president of Nokia Greater China & CEO of Nokia Shanghai Bell, said: “So far we have 43 commercial 5G agreements closed globally, all around the world, whether here in Asia, in the Americas, in Europe, the Middle East and Africa.”

“We’re really showing that Nokia has momentum, Nokia is here and Nokia is strong and leading in 5G, powered by the strength of our end-to-end portfolio.”

Around half of the contracts are what Borchert described as “radio plus”: customers who are not only buying 5G radio technology from Nokia, but also other building blocks used in the future 5G network.

Nokia’s technology portfolio includes mobile and fixed networks, IP and optical platforms, services and software, as well as its Nokia Bell Labs research arm, giving it a breadth that sets it apart from the majority of its key rivals.

It is this reach which it believes makes it a strong player in the 5G ecosystem.

“5G is not just a new radio interface. It is a fundamentally new network architecture from end-to-end, and this really plays to the strengths of Nokia with our end-to-end portfolio. We have all the elements that are needed to build and operate 5G networks,” Borchert said.

Enterprise focus
A key differentiator for 5G networks – certainly beyond the initial rollouts currently underway – will be its ability to support enterprise applications and drive the digitalisation of industries. Support for IoT on a massive scale and low-latency connectivity opens up a number of new and lucrative markets beyond familiar mobile broadband and fixed wireless use cases.

Jae Won (pictured, left), senior vice president, head of Nokia Asia-Pacific and Japan, picked up on this theme. “If you believe the promise that 5G can bring the fourth industrial revolution, then the best way to realise the promise is to work directly with the enterprises.”

He continued: “We work very closely with operators, and we have a business model where we partner with operators to address enterprises, for example with our World-Wide IOT-Network Grid. They are certainly a very important part of our channel toward the enterprise market. If operators don’t want to go after a certain opportunity we also have a direct channel,” he said.

He stressed that Nokia brings unique advantages as it is able to support all geographies. “Because I think Asia will be more manufacturing-oriented, and the US will be slightly more services-oriented, it is very useful to be exposed to both in order to really take full advantage of 5G,” he continued.

5G markets
The Nokia executives highlighted the different paths customers are taking with their 5G rollouts, including some of the reasons for the variations between different geographies.

Jae Won pointed to the example of South Korea, where the country’s three operators have all launched 5G services, powered by Nokia’s technology, proving national commitment to early 5G leadership. Nokia is in a unique position of leadership, as the only international vendor to work with all three operators in South Korea.

“The Korean government sees true potential for 5G to deliver growth and unlock new opportunities for the economy. So they really want to be very fast with 5G roll outs, to go very early,” he continued.

The early launch was not trouble free, however, as the technology is still developing and market expectation was very high due to the strong performance of 4G networks in the country. “There has been a huge improvement since then. It’s much more stable and the performance and coverage has improved a lot,” he said.

With operators in China having recently been allocated commercial 5G licences, this huge market is also likely to see some differences in the way in which the technology is deployed and used.

Markus Borchert said: “What I would argue is different here in China compared with other parts of the world is the strong focus on industrial use cases and using 5G as the catalyst for the digital transformation of the economy.”

In contrast, in South Korea and other global launch markets, the initial use case has either been an extension of the familiar mobile broadband or fixed wireless access use cases.

“I don’t want to say that Europe and North America are totally ignoring this. When we look at the early launches today they are very much focused on non-standalone [using 5G that is tightly integrated with LTE] and with that enhanced mobile broadband and fixed wireless access. In China we will see a very rapid evolution to standalone 5G to enable these industrial applications,” he observed.

Future X network
Looking beyond 5G, Luoning Gui, CTO of Nokia Shanghai Bell, said that the industry is reaching three critical limits which will “redefine and reshape” infrastructure – which Nokia refers to as the Future X network.

First is the limit of smartphone (consumer)-led value creation. In the future, value will come through new IoT and automation-led use cases, shifting the focus from individuals to enterprises.

For operators, the traditional communications service revenue in mature markets is already flat and, while some growth can still be seen in developing consumer markets, in time this will follow the same pattern.

However, new digital services offer a significant potential for revenue expansion, from markets such as manufacturing, smart cities, logistics, transport and health. This creates a market larger in size compared with that of service providers today.

“If they really want to be the lead in the real digital service paradigm, the only way is to transform their business model and adapt to the new reality of agile, on-demand services that are particularly tailored to the different industry segments,” he said.

Second is the physical limit of current networks. This will lead to the adoption of a new, distributed architecture.

In order to deliver low latency services, computing power needs to be moved closer to end-users, leading to increased adoption of converged edge cloud. In this, operators are well positioned due to the positioning of their existing network operations centres, which can support the movement of processing power nearer to end users.

From a wireless perspective, millimetre wave frequencies are beginning to be used to improve capacity, higher orders of modulation will improve efficiency and networks are being densified in order to support existing and anticipated demand for services.

And third is the limit of operational complexity. As the way in which networks are built and used changes, the ability to support a wide range of diverse services means that current operating models will need to change to embrace new, automated solutions.

“Right now, if you look at communications services, very few are dynamic, things do not change that much. However, if you move to a new digital service provider paradigm, you have hundreds of new services that are dynamic and need to be optimised simultaneously, in real time,” he said.