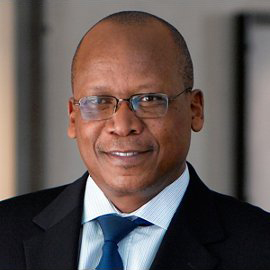 Conventional customer additions look unlikely to significantly lift revenue – quarter-on-quarter sub numbers only grew by 1.8 per cent across the group, according to MTN’s  quarterly trading update. Total subs at end-March 2015 were 228 mllion.

More promising was a 16.7 per cent year-on-year growth in data revenue, which now accounts for 21 per cent of total revenue.

Encouragement also came from a 23 per cent increase in mobile money users to 27.4 million across 14 operations.

Dabengwa (pictured) said MTN bolstered its management to push growth in those areas. The company appointed a group chief consumer officer and plans to appoint an executive for its digital business.

He said the data pick-up occurred as the operator expanded its 3G and LTE networks and pushed the adoption of data-enabled devices and smartphones.

In its operational review, the group noted how Diamond Yellow, its money offering in Nigeria, “has continued to gain traction with a key focus on stimulating subscriber activity, bank partnerships and expansion of the distribution footprint”.

Even rosier was Ghana which showed “strong growth” with 3.5 million registered money subscribers at the end of the quarter and revenues up by more than 250 per cent year-on-year. Mobile money now accounts for approximately 5 per cent of total revenue.

MTN hopes money can fill a gap vacated by conventional subscriber growth. The headline 1.8 per cent figure included a flat performance in South Africa, and 2.1 per cent growth in Nigeria, the group’s largest market. Iran, its second largest, managed only 1.1 per cent growth.

Even though African markets are MTN’s core, it also a significant number of operations outside the continent, including Iran, Syria, Afghanistan and Yemen.