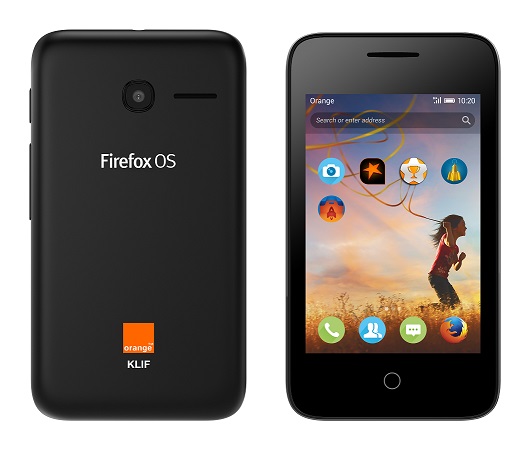 Mozilla has lined up with leading operators KDDI, LG U+, Telefonica and Verizon Wireless on what it’s billing as a new category of Firefox OS phones, with a planned launch date of 2016.

The devices will come in various form factors – flips, sliders and slates – that attempt to balance basic phone requirements with more advanced features such as a smartphone, including apps, content, maps, camera, video, LTE, VoLTE, email and web browsing.

Meanwhile Orange is to launch a 3G smartphone using current vintage Firefox in 13 of its African and Middle Eastern markets in Q2, 2015. The operator is promising an aggressive pricing of its Klif (pictured) offer starting at under $40 (including voice, data and text), that will take the mobile internet to those previously unaddressed.

The Orange Klif, which is manufactured by Alcatel One Touch, offers connectivity speeds up to 21 Mb/s and is dual SIM. It also sports a 2 MP camera and a micro-SD slot. But the focus of the device is its web browsing capability, the central pitch of the Orange offer.

The Orange Klif is also the first Firefox OS phone powered by a MediaTek processor.

“By leveraging Firefox OS and the power of the Web, we are re-imagining and providing a modern platform for entry-level phones,” said Li Gong, president of Mozilla.

“We’re excited to work with operator partners like KDDI, LG U+, Telefonica and Verizon Wireless to reach new audiences in both emerging and developed markets and offer customers differentiated services,” he added.

The reference to developed, as well as emerging, markets is interesting, as is the inclusion of US giant Verizon Wireless in the new initiative.

“Verizon aims to deliver innovative new products to its customers, and this initiative is about creating a modern, simple and smart platform for basic phones,” said Rosemary McNally, vice president, device technology at Verizon.

Following today’s announcements, Firefox OS will be available from operators in more than 40 markets in the next year on a total of 17 smartphones.