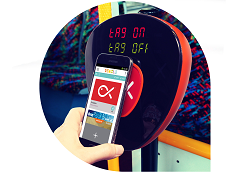 Semble, the mobile wallet backed by New Zealand’s operators and leading banks, added ticketing on public transport in the city of Wellington to its existing payments capability.

The venture struck an agreement with Snapper, a contactless payment system used for public transport in Wellington, the country’s second largest city.

The duo are running a beta whereby Semble users can add a virtual Snapper card to their wallet. An estimated 50,000-plus Android users in central Wellington are eligible. They can access a number of services, including bus, taxi and parking.

2degrees, the country’s smallest operator, already had a deal with Snapper but, through Semble, Vodafone and Spark are involved too now.

The three operators have a combined 50 per cent stake in Semble, while Paymark, the local payment network owned by four leading banks — ANZ, BNZ, ASB and Westpac – holds the other 50 per cent stake.

However, only two of Paymark’s four backers – ASB and BNZ – have so far added debit and credit cards to the Semble Wallet. These virtual cards have been available since March this year.

Semble said it has “thousands” of users on its mobile payment service, which enables  NFC-based transactions using Android handsets.

Snapper covers Wellington but not other parts of the country. Semble will also need to strike similar deals with other transport specialists if it wants nationwide coverage.

Users with the Snapper app do not have to open it every time they want to use it. The app remains active, even if it is closed, or indeed if the phone is turned off.

However, users cannot use a debit or credit card already loaded onto Semble to top up their Snapper app. Instead, the payment has to be added via a credit card in the Snapper app itself.

Previous ArticleMTN South Africa CEO steps down as strikes continue and sales decline
Next ArticleBarclays joins Zapp, but no launch until October