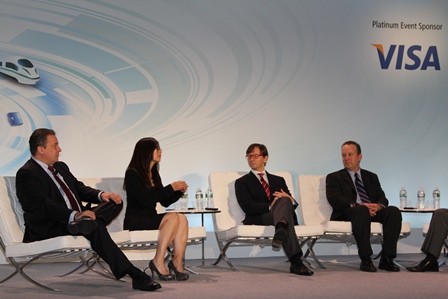 LIVE FROM THE GSMA’S NFC & MOBILE MONEY SUMMIT, NEW YORK: NFC uptake in retail will depend on the way it’s used and the needs of different markets, claimed executives from Citi, C-Sam, Proxama and Aimia.

Neil Garner, founder and CEO of NFC vendor Proxama, was most supportive of the technology, arguing that NFC works, is simple to use and adds value to the retail experience.

“NFC technology is about value add, it’s about engagement, it’s about making the physical digital divide work better. It’s not about one-tap payments, it’s about value-added services and creating a seamless experience,” he said. “QR codes is a transitory technology – they work but they are not engaging. There’s a gap here.”

“I do believe it will play a role, but there is not going to be a dominating technology that solves every problem,” said Felix Marx, CEO of US mobile wallet vendor C-Sam.

And adoption will depend on the needs of different markets, agreed Syndi Pak, director of strategic development at loyalty management firm Aimia, and Tomasz Smilowicz, global head of mobile solutions at Citi Transaction Services

“I think it depends on the region. How people use that technology in order to interact and engage is up to different players,” said Pak.

“It’s not only regions, but countries. I think there are some countries where NFC would be very successful and would become standard. And I think there are many markets where other technologies are being used and will continue to be used,” Smilowicz added.