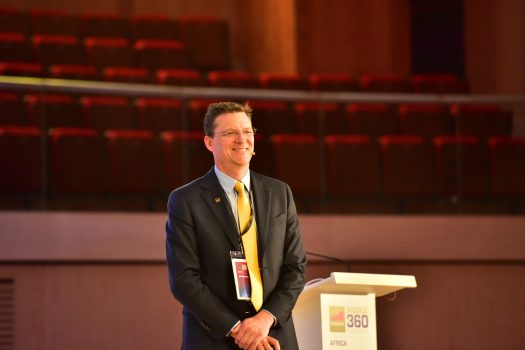 MTN Group booked double-digit quarterly growth in mobile money subscribers across three of its markets as the company made progress towards a goal of trebling its mobile money user base by 2022.

In the company’s results for Q3, MTN Group CEO Rob Shuter (pictured) said “robust growth” in MTN Mobile Money had led a 23.9 per cent year-on-year increase in revenue for its data services unit as it continued to add customers to the service.

Although it doesn’t offer complete sets of user numbers for its Q3, MTN said it added 1.7 million mobile money users across its footprint during the quarter and offered a breakdown of its progress among some of its higher-growth markets.

In Nigeria, it booked a 12 per cent quarter-on-quarter increase in mobile money users; in Ivory Coast numbers were up 14 per cent; while in Cameroon (one of its smaller markets) the figure was 25 per cent.

Other countries reporting “strong performance” include Ghana and Uganda.

Increasing its mobile money user base is one of MTN’s major objectives with Shuter stating at the start of the year he wanted to treble its base to 60 million within next four years and become the largest bank on the continent.