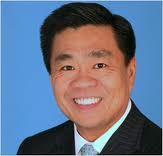 LivingSocial, the second largest deals company in the US after Groupon, has appointed Dickson Chu (pictured) as its SVP of merchant solutions. Chu was formerly a top executive with Citibank on mobile payments and NFC activities. His job title was managing director of digital networks at the bank’s global enterprise payments unit. Previously he was VP at PayPal and also worked at Yahoo. In his new role, Chu will be heading a new division within LivingSocial that is dedicated to "the creation of the next generation of local merchant solutions", according to the company's CEO Tim O'Shaughnessy.

Citi has been an early backer of Google Wallet during Chu's tenure and separately he recently voiced public criticism of Isis, a rival of Google Wallet. The mobile operator-backed Isis was holding backing the development of NFC as a mass-market commercial proposition, opined Chu

Previous ArticleMasterCard buys into mobile banking
Next ArticleNuance: Talk of the town

Users can clock on for payments with Apple Watch