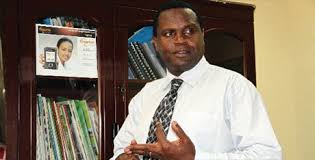 The newcomers can offer customer registration, SIM cards issuance, billing and customer care. They will also be assigned their own numbering range. All will be hosted on the network of Airtel, the country’s second-largest network behind Safaricom.

Mobile Pay is backed by Tangaza Pesa, which already offers a mobile money transfer service. But delivering the service using its own SIM card will improve the firm’s margins.

“While we continue with mobile money services as our core business, our customers will also access voice, data, and SMS services,” Oscar Ikinu (pictured), founder and chief executive of Tangaza Pesa, told The Daily Nation.

Although he would not reveal its pricing, Ikinu said voice, data and SMS would be offered below current rates because they are a valued-added service that Mobile Pay can use to lure new customers.

Finserve Africa is backed by Kenya’s Equity Bank, which previously partnered Safaricom on the unsuccessful M-Kesho, a mobile banking and savings service. The service failed because of disagreement between the two companies.

Now the bank will use its MVNO licence to go it alone and attempt to steal market share from its former partner.

Zioncell Kenya is a subsidiary of Mobile Decisioning, a local company that offers a range of mobile payment services. It mainly targets young Christians. Besides offering mobile money services more efficiently, the company will use its MVNO licence to offer voice, data and SMS at a competitive rate.

Separately, the regulator said it wants to mandate national roaming among the country’s operators but will have to wait for the court ruling in a case between Airtel and Safaricom.

The smaller operator wants to be granted access to the M-Pesa platform. The regulator hopes the roaming measure will also encourage further competition in the country’s mobile market (not just mobile money).

Previous ArticleGoogle Glass updates include KitKat, but video calls scrapped
Next ArticleLINE aims for 1B users in 2015