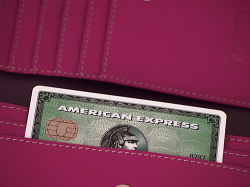 Credit card giant American Express and wearables firm Jawbone will later this week take the wraps off a deal whereby customers can tap-and-pay in shops and restaurants using a virtual card on an NFC-based fitness band, according to The Wall Street Journal.

The new arrangement is not available for Jawbone’s newest model, the late-running UP3 set to debut next week, but will be ready for a later launch.

Like many newbies to the payments market, Jawbone is being conservative by effectively providing a wallet for a traditional credit card, rather than creating its own payment instrument.

It isn’t clear whether the wearables firm is also planning to work with Amex rivals, Visa or MasterCard, although it would seem strange not to seek as wide a footprint as possible among customers. PayPal is another potential partner.

Wearables and smartwatches (Apple Watch and others) are emerging as interesting potential devices for mobile payments.

For its part, Amex has appeared to move more slowly than its two rivals in embracing new payment initiatives in recent years. This announcement might be calculated to show it is on-trend with new technology.

Stand by for Apple Pay’s launch in Australia, teases Amex