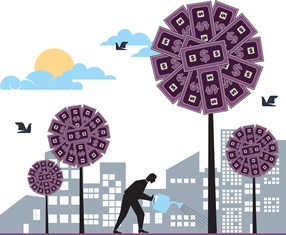 Newcomers to the UK payments industry hope to find the elusive formula for worldwide success, as Richard Handford discovers.

Over the past decade, internet payment services, such as PayPal and more recently Square, have become familiar brands. And now there is a new crop of start-ups, predominately offering services for smartphones, and all in agreement that the world of online and offline payments are blurring for consumers. Many of these newcomers are based in the United States, but some of the contenders to be tomorrow’s payment giants are from the UK.

Take Paddle for instance. Little more than a year ago, it was founded by Ed Lea in the spare room of his house in Highgate. The start-up now has £300,000 in backing, a figure which includes support from venture firm EC1 Capital, as well as friends and family.

“I started looking at online payments, both on the web and mobile web. There had been no innovation in that space for 12 or 15 years since PayPal,” says Mr Lea.

The result impressed Marks & Spencer sufficiently that this month Paddle is collaborating with the UK retailer whereby consumers can use their mobile phones to buy products from one of its websites.

So how does it work? The consumer clicks on Pay with Paddle when they come to the website checkout. A QR code is then generated and the consumer opens the Paddle app on their phone and scans the code to process the payment. The first time they make a purchase, they add a debit or credit card to their Paddle account.

The aim is to make the whole transaction process less onerous for users compared to other offerings.

Mr Lea says Paddle can make transactions even smoother by linking the card and phone directly, so removing the need to scan the QR code.

Another UK start-up, Ensygnia, based in London, is working in a similar area, but with a slightly different take on what matters in a transaction.

Ensygnia also enables users to scan a QR code on a website to make a quicker transaction, but the firm is more interested in authenticating a user’s identity than processing their payments. “We do not want to create another wallet,” says chief executive and co-founder Richard Harris. “We enable payments, but we are not a payments company.”

Despite not wanting to be a payments firm, Ensygnia is still interested in establishing its own consumer brand that stands for trust in consumer’s minds; think “intel inside”, says Mr Harris.

The company closed a £2-million round in early-May. The financing, negotiations for which started in 2012, includes both services as well as cash. Backers include Wayra, the accelerator fund run by Spanish mobile operator Telefonica, as well as Jesus College, Cambridge and Rhoddy Swire, founder of Pantheon Ventures, a private equity fund.

The company is currently running a number of trials with unnamed clients and is aiming to go live with some of them by the end of the year.

Birmingham-based Droplet is going another route. It is more focused on using smartphones for making payments at a retailer’s point-of-sale or sending money to friends and family.

This month it is launching with customers Chiltern Railways and Airparks. And things are changing dramatically for the company in other ways as it is in the process of negotiating £3 million in financing from undisclosed backers.

In some ways, Droplet has the most ambitious aims. The company does not link consumers’ debit or credit cards to their accounts. Instead it gets consumers to pay cash into a pre-paid account from which they can make payments to merchants. Co-founder Steffan Aquarone says this approach means payments is just the start of something bigger.

“We don’t want to be a payments firm; we want to offer people an alternative for what they can do with their money.” Bill payments and loans are two possibilities for the future, says Mr Aquarone.

However, the company charges no fee to either consumer or merchant. Instead, it hopes to make money by offering additional, paid-for tools to merchants. Its platform will be open to outside developers to sell their apps to merchants too.

“Are we doing anything revolutionary? I am not sure we are. Maybe we are just combining existing things in an unusual way,” says Mr Aquarone.

Although hardly a conventional start-up – it’s owned by the three largest mobile operators in the country – Weve launched a service in the UK earlier this year that is sure to be followed with interest elsewhere.

The m-commerce venture is offering a common platform for advertisers to reach all the operators’ subscribers in one go; operators normally act on their own, which makes it harder for brands.

Weve says it will launch mobile wallet and payments later this year or early-2014. Mobile operators in other countries are keen to see if such a joint service can succeed.

Although not a UK firm – it’s from Hong Kong – MPayMe is set to start a pilot of its mobile payments service in the UK, along with a number of other countries. The service, which launches in July, enables subscribers to scan QR codes to make point-of-sale payments, as well as pay bills and make online purchases.

UK firm GoCardless, which launched in 2012, offers a service aimed at businesses which want to arrange regular payments, such as direct debits, from their customers, but do not accept card payments.

The service is not primarily mobile, although some developers have come up with mobile apps for GoCardless that enable merchants to accept payments on the go. GoCardless raised $3.3 million in April following $1.5 million in seed capital in 2012.

Finally, the UK has a number of services that enable small merchants to process payments on their smartphones using a card reader. One such example is German firm SumUp, which launched last year in the UK and other markets. And it has just announced an investment round with big-name backers, including American Express and Groupon.

This article was originally published in The Future of Payments report in The Sunday Times newspaper by Raconteur Media, in association with Mobile World Live. Download the full PDF report here.