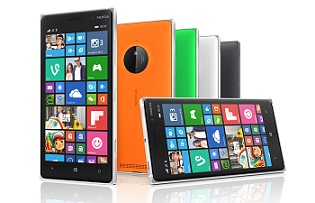 LIVE FROM IFA 2014: Microsoft announced a trio of new devices using the Nokia Lumia brand, including a device it described as an “affordable flagship”.

Also taking the limelight was the Lumia Denim update for some existing smartphones, which is said to combine features from the latest WP8.1 upgrade with “exclusive enhancements” such as Lumia Camera, which delivers high-quality images at fast speeds.

Lumia 830 (pictured) has a 10MP PureView camera and integrated wireless charging, for a price of around €330. This, it said, “delivers flagship imaging and innovation without the flagship pricetag”.

In some regards, the device’s low price tag is reflected in some of the other specifications. It is powered by a 1.2GHz quadcore Qualcomm processor, for example, which is less powerful than that used in some rival devices.

The 5-inch screen is 1280×720 pixels, which again lags some of the alternatives. And the front-facing camera is also less than impressive, at 1MP.

Other features include “three high-performance mics delivering true 5.1 surround sound”. It has 16GB of memory alongside a microSD expansion slot.

Also highlighted was “low-power motion-sensing technology, SensorCore,” which will track movements and location even when the device is idle when paired with several health and fitness apps.

It ships with the latest version of Microsoft Office Mobile pre-loaded, and also includes 15GB of free OneDrive storage to enable content to be synched and shared easily.

It will rollout globally later this month, and be available in bright green, bright orange, white and black.

Joining the mid-tier range are the Lumia 735 and dual-SIM Lumia 730. These come with wide-angle, 5MP front-facing cameras “great for selfies and Skype video calls”. They are also bundled with a three-month subscription to Microsoft’s Skype Unlimited World service in “selected markets”, and offer “one-tap” access to Skype video during phone calls.

The main cameras are 6.7MP.

The pair are powered by 1.2GHz quadcore Qualcomm processors, and feature 4.7-inch screens. Onboard memory provision is 8GB, with microSD expansion and 15GB of free OneDrive storage.

Again rolling out globally this month, the devices will be available in the “recognisable” Lumia colours of bright green, bright orange, dark grey and white.

The centrepoint of the Lumia Denim upgrade is Lumia Camera, which will be available for Lumia 930, Lumia Icon and Lumia 1520 devices (Microsoft said that this is because of features that are hardware-dependent).

This enables owners to take “numerous photos with just milliseconds between shots”, capture “4K-quality” video at 24 frames per second, and capture images in low-light with “the latest-generation imaging algorithms.”

Other features introduced through the Windows Phone 8.1 Update 1 include Cortana, Microsoft’s Siri voice-assistant rival, in markets where it is available; live folders; “apps corner”, enabling a customised start screen to be created where only specific apps or games are available, and consumer VPN support.