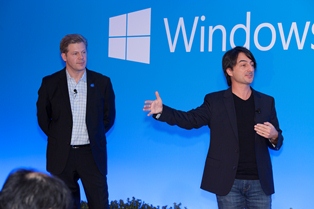 LIVE FROM GSMA MOBILE WORLD CONGRESS 2014: Microsoft announced nine new hardware partners for its Windows Phone platform, as it looks to build momentum for the platform in the mass market.

While the list includes some familiar names, specifically Lenovo, ZTE and LG Electronics, it also includes a number of regionally focused players such as Longcheer, Gionee and JSR in China and Karbonn and Lava (Xolo) in India, as well as contract manufacturer Foxconn.

According to Microsoft, its partners now include companies delivering 56 per cent of the world’s smartphone shipments.

In a blog post, Microsoft’s OS head Joe Belfiore (pictured, right) wrote: “Some of these partners are names that might not be familiar to you, but they’re leading the global expansion in the smartphone category.

But the company would not be drawn on the level of commitment these players have when it comes to actually bringing smartphones to market.

While the company highlighted the “deep commitments” it has with existing partners including HTC, Huawei, Samsung and – of course – Nokia, the company has also taken steps to make it easier for new vendors to bring Windows Phone devices to markets.

In order to drive adoption by new vendors, the company announced its Windows Hardware Partner Portal, to provide access to tools and content needed to build Windows Phone devices.

It is also working with Qualcomm to help manufacturers bring products to market through the availability of hardware reference designs.

The move comes as Microsoft eases some of the mandated requirements for the Windows Phone platform, which should provide some additional flexibility for device makers.

For example, the requirement to include specific buttons has been removed, and the company said it will work with existing Android hardware, making it possible to benefit from economies of scale in components and design across different lines.

In order to drive volume growth, the company will support additional Qualcomm processors, including the Snapdragon 200 – which will “get us to even lower price points than we see today” – and the Snapdragon 400 line, in the latter case including LTE capabilities.

Also in the pipeline is support for dual-SIM devices, a market that Microsoft has not currently been addressing.

Belfiore said that 2013 was “the year we got Windows Phone to the world, and set up a system where the volume could grow”.

“With the volume comes the apps, and benefits beyond just the end user features,” he continued.

The latest high-profile app to join the Windows Phone catalogue is Facebook Messenger.

Previous ArticleJapan the place to be for monetisation
Next ArticleMozilla builds Firefox OS momentum; eyes $25 smartphone