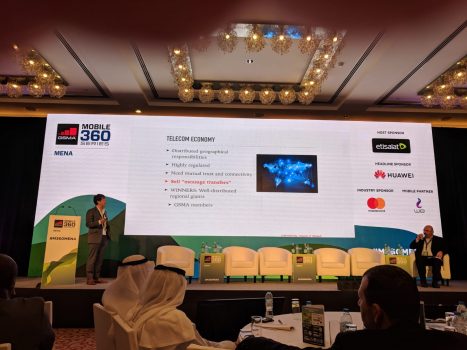 LIVE FROM GSMA MOBILE 360 SERIES – MENA, DUBAI: Daichi Nozaki, VP of global business at SoftBank (pictured), argued blockchain could prove to be a key driver of operator transformation at a time when they face subscriber saturation and falling ARPU.

“We always talk about disruption…but this time, instead of being disrupted, we can disrupt by utilising blockchain technology,” he said.

Nozaki explained that the telecoms sector as a whole has been built on both trust and connectivity. Since its inception, operators relied on selling message transfers to each other and, due to a heavily regulated environment, there are a number of dominant players in each market.

However, the landscape changed substantially with the next big connectivity revolution, the internet era. Nozaki explained the internet broke “the boundaries” in particular geographical bounds “as it doesn’t matter where you are” when using it.

The internet is also less regulated in terms of infrastructure and requires a centralised database operated by only a few players, for example Google, Amazon and Apple.

Most crucially, message transfer itself, is now free: “These companies are not making money by providing these services and that is the biggest difference between us and them. That was the first threat we faced.”

Nozaki said there were many similarities between the blockchain economy and the telecoms economy in terms of being decentralised. But, he noted the technology “is not regulated well yet, but it needs to be.”

“Mutual connectivity and trust in both is very important.”

CBSG consortium
To push the operator opportunity in blockchain, SoftBank is a major backer of the Cross Carrier Blockchain Study Group (CBSG), a group formed in 2017 to deliver services covering blockchain-based digital payments, personal ID authentication, IoT applications and various other use cases. Today the group counts a total of 13 operator members

CBSG chairman Ling Wu said the group was building a consensus on the telecoms opportunity in blockchain, while explaining some of the potential use cases the technology opens, for example, enabling a user to transfer a gigabyte of data between SoftBank’s network in Japan and Sprint’s network in the US.

In the same way, a wallet roaming system could also be possible, where a person using a SoftBank phone could buy something in another country using a different network when they are travelling.

Wu said a cross-carrier payment system and a similar identity system, which uses the operator network as a personal identification tool, are set to go live in Japan, South Korea and Taiwan in Q1 2019.