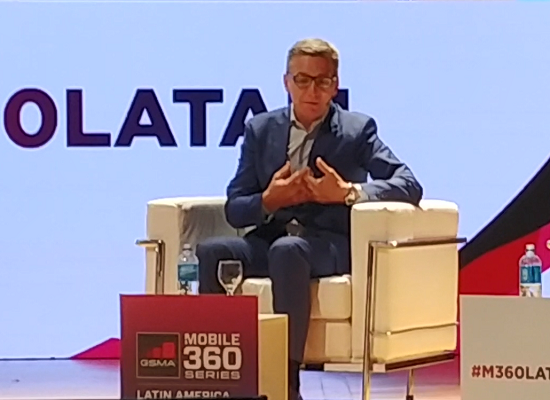 LIVE FROM GSMA MOBILE 360 SERIES – LATIN AMERICA, BUENOS AIRES: Carlos Moltini, CEO of Telecom Argentina (pictured), told delegates that while operators are responsible for the key component in delivering the benefits of digitalisation, the core business faces a number of investment challenges as the industry moves towards 5G.

“We believe that telcos are the tool that enables societal development, in this case the country’s development. We want to be part of that process,” he said.

Speaking in keynote session, the executive noted the company is working to become a “modern company, with a client-centric vision”. It intends to be responsible for 60 per cent of the industry’s investment in infrastructure in Argentina, compared with its 40 per cent market share.

“The investment plan is strongly focused on mobile development, with an enhancement of sites to provide better coverage and increase infrastructure capability. Our goal is to have 4G coverage and internet speeds that truly differentiate us from the rest,” he said.

This includes broad geographic coverage: “We are focusing on having a company that covers the entire country, from north to south, so we are working hard to provide coverage in areas that in the past weren’t covered by our company.”

“Of course, we have to get ready for 5G, and we are already working in this direction, which is why our network is not 4G, but it is 4.5G.”

Network transformation
He noted work such as the virtualisation of its core network and modernisation of transport infrastructure as part of this transformation. Given the “central role” of video in its business, including content creation, Telecom Argentina has also spent several years working on the development of a single content distribution platform.

But, he continued, “5G is a product that will have to be supported by the current business, the 4G business”.

And, as seen in markets globally, revenue is stagnant due to competitive pressure and market saturation, while there is growing demand for bandwidth: “The business, therefore, has narrower margins.”

Domestic challenges
Moltini said Argentina has “unique tax pressures”. He continued: “Telecom operators are under a lot of pressure because of the tax system. Taxes that are levied not only on revenue, but on importing devices and other products to allow business development.”

This means spectrum pricing for 5G, being supported by the 4G business ahead of established use cases and models being in place, will be a critical issue: “In countries like ours, spectrum prices are much higher on comparative terms than the spectrum prices in central countries,” he said.

Echoing comments from other operators globally, Moltini also noted that site acquisition is already a challenge for 4G and will only become more critical with the move to 5G: “Argentina has serious problems with 4G deployment sites” he said, noting challenges dealing with municipal authorities.

“We cannot allow red tape from stopping us doing the development we need in terms of sites.”