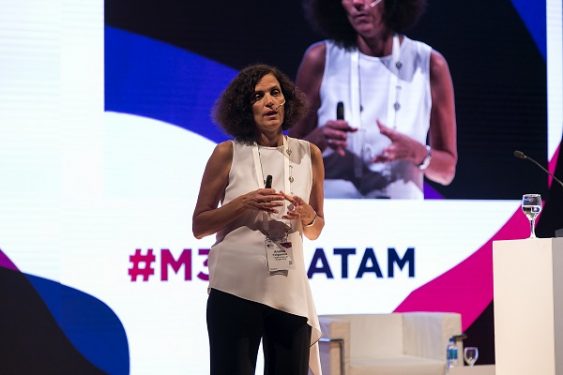 LIVE FROM GSMA MOBILE 360 SERIES – LATIN AMERICA, BUENOS AIRES: Executives suggested timeframes for the launch of 5G services in Latin America, even the most optimistic of which indicates that deployments are not around the corner.

The comments come as some operators in the US, Middle East and South Korea push ahead with early service availability.

“In Latin America, we don’t believe that we will have 5G deployments in the medium term, because basically we don’t see the business case so evident. Of course we will have 5G, I don’t know exactly when, but it will be beyond 2021, that’s for sure,” Andrea Folgueiras, CTIO of Telefonica Hispanoamerica (pictured) said.

She noted that improvements in LTE networks are enabling them to deliver many of the services envisioned for early 5G deployments, for example carrier aggregation and MIMO. In addition, “in Telefonica and in Latin America we don’t see that it makes sense to have these deployments of 5G networks with standards that later on will be replaced by more final standards”.

“In a nutshell, in Telefonca we are working on 5G from a technological standpoint, to be ready and to have everything in place in terms of knowledge, resources, capabilities. And we are waiting for the business case that will justify a mass deployment.”

Mohamed Madkour, VP of global wireless networks marketing and solutions at Huawei, also identified the boost in LTE capabilities as a reason for potential delays in 5G adoption: “The economies of scale for 5G are not there yet. The controlling point for 5G is the return on investment (ROI), so what do we have to do? I think we need to work together to shorten that ROI, and if it’s shorter, I think it will be popular in Latin America.”

Noting that internet penetration is low in Latin America, whether through fixed or mobile networks, he suggested fixed wireless access is “the first use case for 5G that we can talk about as a business case”.

“We believe that fixed wireless access is the best opportunity for operators to capture, now with their 4G networks, and then going to 5G”, he said.

Vendor confidence
Eduardo Castanon, head of networks, CU South America, at Ericsson, was bullish on the timetable: “Based on the spectrum we have available today on the market, we believe in the second half of 2019 we will start seeing the first implementations of 5G in Latin America in medium bands, which most countries have, or in millimetre bands, that some countries have.”

“In 2020, we believe that based on these first introductions we will have the possibility to supplement mid-band and low-band, so we can have deployments in the region, and 2021 will be the time where we are going to see the first important cities with partial coverage,” he continued.

When quizzed on when economies of scale will start to kick-in for 5G, enabling prices of equipment and devices to come closer to 4G levels, Castanon said: “I think that by 2021 we will be looking perhaps at more competitive prices.”