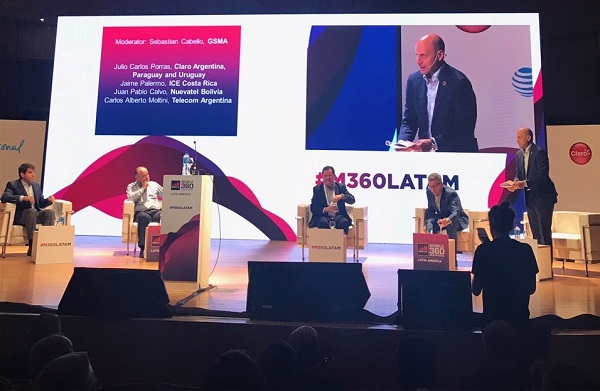 LIVE FROM GSMA MOBILE 360 SERIES – LATIN AMERICA, BUENOS AIRES: Costa Rica’s government made some key errors while 4G was in its infancy which must not be repeated as it prepares for 5G, the CEO of state-owned operator Instituto Costarricense de Electricidad (ICE) argued.

Jaime Palermo (pictured, centre), said a key mistake was equalising prices for mobile data and fixed internet, a move which hit operators hard and even sparked a battle in the Supreme Court regarding regulations which “were strangling the operators”.

These errors, he noted, resulted in investment in the telecoms industry stagnating.

Earlier this year ICE announced plans to expand into more countries in the region in a bid to rival market leaders Clara and Movistar: the Costa Rican operator is also planning to deploy 5G in the next two-to-three years.

However, Palermo, speaking on a panel at the morning’s keynote, pointed out “we need to be very clear on how to monetise this because 4G was an investment and it hasn’t translated into significant utility margin for us”.

“How can we have made money when fixed internet and mobile data was the same? It was a hard experience. We saw 95 per cent data increase once we had a fair price and there was some kind of standardisation”.

“We should not get to 5G as we got to 4G, that’s the main learning…things need to evolve in a different fashion.”

Palermo believes this is possible because regulatory authorities in the country are becoming more mature and have people with more expertise: “In the last two years there has been a significant change. We have softened on the idea of bringing issues to court all the time.

“There is now more legal certainty for operators and we believe it will continue to be so,” he concluded.

Spectrum
During the session, the CEOs of Claro Argentina and Telecom Argentina agreed there is a need to free up spectrum and change government policies on spectrum caps in Argentina.

Claro Argentina chief Julio Carlos Porras (pictured, far left) summarised their stance, noting if the success of Argentina’s 4G rollout is to be maintained “we will have to come up with a serious plan to allocate more spectrum…there is a big need to develop capacity as a result of saturation”.

In Bolivia, spectrum is not currently an issue, said Juan Pablo Calvo, CEO of NuevaTel Bolivia, (pictured, second from left) because it is a small country.

As for 5G, he said the best use case is a cost efficient way to get fixed wireless access so all homes can have internet access: “In terms of other services it is still science fiction for us…we need paved roads before we can have driverless cars,” he commented.