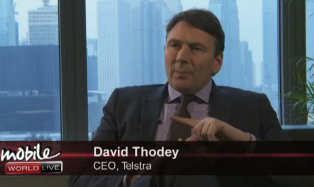 EXCLUSIVE: Australian LTE pioneer Telstra is aiming to launch smartphones supporting the new network within the next quarter period. In an exclusive interview with Mobile World Live, CEO David Thodey revealed that “the current plan is first quarter next year,” a timeframe which would be at the top end of a previously announced ambition to bring smartphones to its LTE product portfolio in the first half of 2012. “Obviously we’re dealing with Samsung and HTC, and it’s all about the spectrum support, but we think that’s a good opportunity,” Thodey noted. “And we think that’ll change the whole take-up.”

Launched last September in state capital city centres and more than 30 regional and metropolitan centres, users can currently only access the service via USB dongles. However, Thodey said the operator is also eager to get its hands on LTE tablets in the near future: “The tablet is so rich, if you can get that on LTE it would be like a device on steroids. We like the sound of that.”

Thodey described the performance of the data-only LTE network as “outstanding” and said that plans are afoot to add voice capability in February 2012.

On the subject of voice services, Thodey was honest in his assessment of the commercial potential from his company’s launch of HD Voice over its older mobile network (Telstra claims its HD Voice service is the world’s largest offering). “I wish it was going to be something that would completely transform our offering.  The truth is, it is a wonderful experience… Can I charge more for it, or can I have it as a differentiator to other operators? The truth is, we don’t know yet.  It is deployed and it’s going very well, not many handsets support it, so there is one issue, but will people go to your network because of that?  I’m not sure, because we’ve not tested that.  I know that people will come to our network because of its speed and reliability and its coverage, unquestionably.  Hi-def voice, I don’t know yet.  But we are going to try it, and see if we can create a proposition, but it’s too early to say, really.”

Elsewhere in the interview Thodey commented on Telstra’s decision to opt for a ‘throttling’ approach as a strategy to deal with excessive data consumption, a move that contrasts with many other operators which have decided to enforce ‘overage charges.’ Thodey claimed that unlimited plans are “very difficult to manage.” He also touched on the company’s efforts to deal with the data explosion, reiterating senior executive belief that consumer femtocells may not be the answer, but that “it’s inevitable that we will have to offload.”