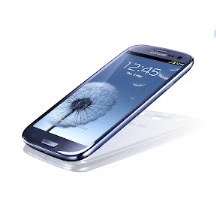 Headline features of the device include its 4.8-inch HD Super AMOLED display – at the launch event in London, the company noted that while the screen is 22 percent bigger than that in the Galaxy S2, the bezel around the case has been narrowed, so that “the unit did not get much bigger.”

JK Shin, president and head of the IT & Mobile Communications division at Samsung, said that the device offers the “most seamless, natural and human-centric mobile experiences.”

This includes S Voice, a speech recognition technology intended to compete with Apple’s Siri. It also has face detection technology, which can keep the screen awake if a user is reading without making any other input to the device.

The Galaxy S III is powered by Android 4.0. It has an 8-megapixel main and 1.9 megapixel front camera.

It is set for launch on 29 May, initially in Europe, before being rolled out to the rest of the world – the launch was dubbed “the largest in Samsung’s mobile history,” across 296 operators in 145 countries. An LTE variant is also set to follow for the US, Japan and China.

So far, Samsung has provided few details of the processor powering the device, other than that it will be quad-core. Some reports have previously suggested that the LTE version will swap this for a dual-core chip, as HTC has done with its flagship One X device.