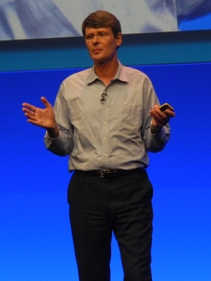 Thorsten Heins, president and CEO of RIM, said the company is “undertaking a comprehensive review of strategic opportunities including partnerships and joint ventures, licensing, and other ways to leverage RIM’s assets and maximise value for our stakeholders,” following the release of another set of poor quarterly results.

The company said that it expects the current year (its fiscal 2013) to see “continued pressure on revenue and earnings.” Noting a desire to focus on “long term value creation,” it will no longer provide specific guidance for its coming quarters.

Heins also said that the company had identified “a level of complexity that is not conductive to the efficient operation of our business” in its management. As part of a restructure, heading for the door are David Yach, CTO Software, and Jim Rowan, COO Global Operations, who departs “after an open dialogue on the future of global operations.”

And former co-CEO, Jim Balsillie, has now resigned as a director of the company’s board.

In the fourth quarter, the company saw a net loss of US$125 million, compared with a prior-year profit of US$934 million, on revenue of US$4.2 billion, down from US$5.6 billion. The revenue breakdown for the quarter was 68 percent hardware, 27 percent service, and 5 percent software and other.

Some 11.1 million BlackBerry smartphones were shipped during the three months, down 21 percent from the previous sequential quarter. The company also shifted “over 500,000” PlayBook tablets.

In terms of its current portfolio, Heins noted that the lack of an LTE device and high-end smartphones is impacting its performance in the US. It also noted that while its Curve devices “defined the entry level smartphone segment around the world,” this did not go unnoticed by its competitors.

The company has more BlackBerry 7 devices set to come out in the coming weeks, as a way to strengthen its position in the mass-market smartphone sector. It also said it plans to “aggressively incentivise” its BlackBerry 7 business to drive upgrades from existing BlackBerry owners.

Heins also said that RIM’s “full touch” devices face a “challenging” position in the market, given the strength of its competitors in this sector. The launch of BlackBerry 10 devices “remains on track for the latter part of this year.”

There had been some concern that as a RIM insider, Heins would follow a path of more of the same. In its conference call, he looked to dispel this, stating that after a “reality check” on where the business is, “it is now very clear to me that substantial change is what RIM needs.”

Heins said that the company will refocus on the enterprise business, having lost momentum due to the move toward “bring-your-own device.” In line with this, the company introduced its Mobile Fusion device management technology.

He also said the company plans a selective approach to the consumer market, to go after targeted segments and to seek partnerships for “features and content that are not central to the BlackBerry value proposition” – such as media apps.

Heins also said that despite making numerous acquisitions to build a value-added services business in recent years, it would be “extremely difficult” and costly for the company to transition this into a profitable operation. As a result, this activity will be scaled back.

The company is now looking for a single COO to run its global operations. As previously announced, RIM is also looking to appoint a new CMO, a process which is apparently “going well.”