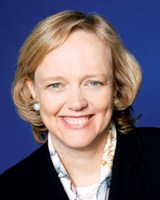 HP head Meg Whitman told French newspaper Le Figaro that the company is set to announce its plans for the WebOS device platform business “in the next two weeks,” having stated in August that it would not offer any more products powered by the platform. According to the CEO (pictured), the choice is not an easy one, and has left the company with 600 staff in “limbo” in the interim. It was also reported that Whitman had said that the company needs to have “another operating system,” to reduce its reliance on various Microsoft Windows platforms.

HP has previously been reported to be in talks with numerous potential buyers for its WebOS assets, with the latest suggestion being that Intel and Qualcomm are still in the frame. PCMag.com said that a condition of a deal will be that HP gets a cheap license to use the OS, in order to create smart printers – with the possibility that it has such products near to release.

In addition to the WebOS platform, HP also acquired a number of smartphone patents through its acquisition of Palm, which may prove appealing to a potential buyer.

In its latest quarterly results call, HP said that it had recorded costs in the fourth quarter of US$755 million related to the “wind-down of the WebOS device business,” as well as goodwill write-downs of US$885 million which included charges related to its purchase of WebOS creator and smart device pioneer Palm. Its costs included sums related to the sales incentive programme, which saw it heavily cutting the price of devices, as well as payments to suppliers and inventory costs for components, and operating expenses and restructuring charges.

HP paid US$1.2 billion to acquire Palm in April 2010 – a figure passed by the costs HP recorded related to this business in the three months to 31 October 2011.

US tipped to push for domestic chips