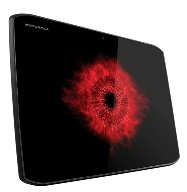 The devices see Motorola dropping the Xoom brand it used for its previous tablet device, with the company adopting the Droid-brand used by Verizon Wireless’ Android smartphones. It was not revealed if the Xoom name will be reinstated for tablets sold via other channels, although previous products in this line were met with a lukewarm reaction.

As with the initial Motorola tablet, the companies may find Xyboard a difficult sell due to its price. For example, the Xyboard 10.1 (pictured) in its cheapest form costs US$529.99, with a two-year contract to a US$30 monthly data subscription – a US$1,249.99 commitment. In contrast, an iPad 2 with 3G connectivity on a rolling connectivity contract costs US$629.

Verizon is currently offering an LTE version of Samsung's Galaxy Tab 10.1, at the same price point as the Motorola device.

Initially the devices will ship with Android 3.2 (Gingerbread), although upgrades will be offered to Android 4.0 (Ice Cream Sandwich). They include 1.2GHz dual-core processors, 1GB of RAM, and support Motorola’s MotoCast software to provide remote access to music, pictures, videos and documents stored on home computers.

The company said that Xyboard 10.1 is “optimised for productivity,” with stylus support for notetaking and document mark-up. The Xyboard 8.2 is said to be “perfect for portable entertainment.”