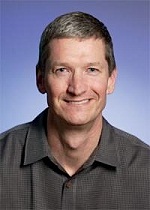 Apple reported fiscal Q3 numbers last night that for once failed to meet sky-high expectations, as iPhone sales slowed in anticipation of the new model believed to be due later this year.

The Cupertino giant’s net profit for the quarter ended 30 June came in at US$8.8 billion (US$9.32 per diluted share), on revenue of US$35 billion. Both figures were up from a year ago, but were below analysts’ estimates of around US$37.2 billion and US$10.32 per share. Apple shares fell nearly 5 percent in afterhours trading.

Apple sold 26 million iPhones in the quarter, up from 20.3 million a year ago but down from 35.1 million the previous quarter. The iconic smartphone accounts for about half of the firm’s sales, generating US$16.2 billion in the quarter.

“Apple is in that rarest of all positions where the Street will punish them for anything less than an excess of success,” said John Jackson, an analyst at CCS Insight. “If there's a positive spin on the iPhone story, it is one of latent demand.”

“We’re thrilled with record sales of 17 million iPads in the June quarter,” said Tim Cook, Apple’s CEO. He also announced the launch of the new Mac operating system (Mountain Lion), available from today, and confirmed the launch of iOS6 in the Autumn. But he was tightlipped on the so-called ‘iPhone 5,’ tipped to launch in October.

On an earnings call, Apple’s CFO Peter Oppenheimer noted that “iPhone sales continue to be impacted by rumour and speculation around new products.”

Oppenheimer said that Apple is forecasting revenue of about US$34 billion and diluted earnings per share of about US$7.65 for its current quarter. He also confirmed the firm would pay a rare dividend to shareholders of US$2.65 per share on 16 August.