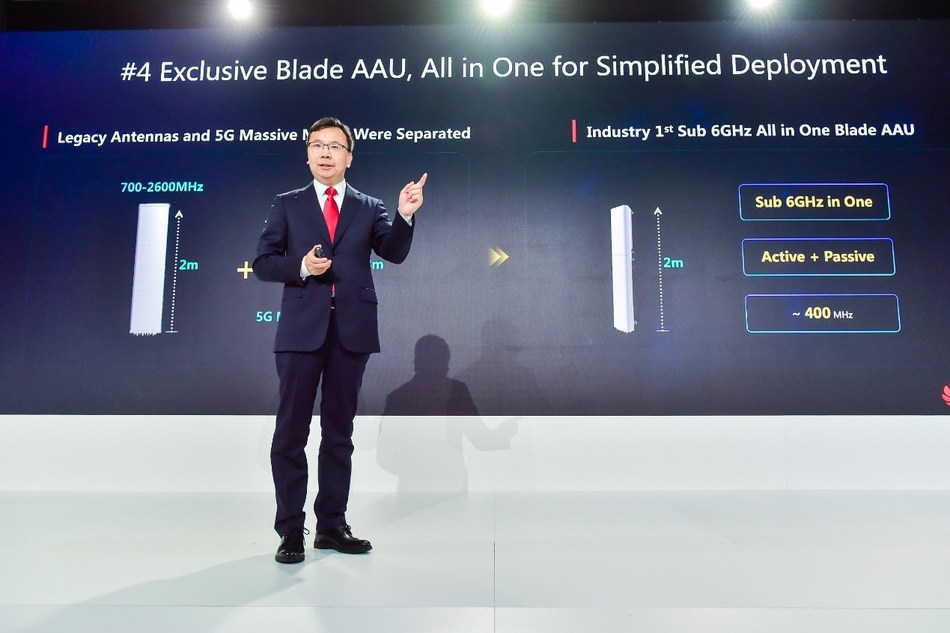 PARTNER FEATURE: As operators across the world continue to construct 5G networks, many are still struggling with how to cost-efficiently deliver them alongside legacy services, while developing the multitude of business cases offered by this technological revolution.

Solving these issues have been at the core of much of Huawei’s carrier R&D in recent years and the fruit of this innovation was unveiled at 5G, Bring New Value: Huawei Product and Solutions Launch in London.

During the event, Huawei president of 5G product line Yang Chaobin (pictured) presented a range of solutions coming to the market in 2020. These are designed to allow operators to deliver on the promise of 5G despite limits they may face from their spectrum positions or regulatory issues.

Yang noted operators using its equipment are already able to provide superior 5G performance. Some are able to achieve this with 20 per cent less spectrum resource than rivals, he added, citing performance statistics from LG Uplus in South Korea, Sunrise in Switzerland and BT brand EE in the UK.

During his keynote, Yang illustrated the importance of operators supplying ubiquitous 5G to customers, despite detractors believing it will likely be a technology only used in concentrated areas.

“Whenever new network technology comes people will think this is just a hot-spot technology,” he said. “Ten years ago when we started to deploy LTE, a lot of people said that it would only be deployed in a hot-spot. Today, lots of people think that 5G will only work in a hot-spot. That’s simply not true: all our operators across the world will provide ubiquitous coverage.”

To support its partners in achieving this vision, Yang unveiled a number of products and innovations designed to lower the total cost of ownership for 5G infrastructure and open new enterprise and commercial use cases. This will aid the monetisation of the significant investments made by operators in spectrum and deployment costs.

Limited resources
Building on Huawei’s credentials of enabling superior use of limited spectrum and site resource, Yang said its new 400MHz ultra-high-bandwidth Massive MIMO AAU would support all frequencies in the C-Band.

In addition, Huawei will release 3 bands FDD RRU developed to support 700MHz, 800MHz and 900 MHz frequencies, which are set to be allocated in a number of European countries over the coming months and years.

Yang noted the ability to support a large range of bands within one physical unit would reduce capex and opex, while also simplifying network deployment.

In several markets one of the key issues hampering optimal deployment are strict regulations on the size and location of network equipment.

Yang said site acquisition for new antennas were a “great challenge” for operators, especially in Europe, with more than 20 per cent of legacy sites unable to have additional antennas installed due to space limitations.

This means massive MIMO equipment required to deliver 5G is unable to be placed alongside existing passive antennas used to deliver other technologies.

Huawei has also designed a number of other solutions, such as the Easy Macro 3.0, with compact form factors so they can be used in locations such as lamp posts in residential areas. Massive MIMO AAU Solutions are designed to weigh less than 25kg to fall within EU guidelines for installation by a solo worker, reducing costs further.

Going green
Over the last year, businesses across the world have been keen to outline their green credentials and unveiled initiatives to reduce the environmental impact of their operations.

While critics have suggested 5G technology will increase power consumption and hamper goals towards greener operations, Yang argued this is not necessarily the case.

“Some operators complain the power consumption of 5G is two- or three-times more than 4G, but this is not true for Huawei’s base station.”

Huawei’s tests show its AAUs offer the same power consumption whether on 4G or 5G, but 5G AAUs provide 50 times greater cell capacity compared to  those delivering 4G. This means power consumption per bit in the 5G era has been greatly reduced. Forthcoming innovations in AI are also set to drastically cut the energy used, delivered through advanced network coordination and heat dissipation.

The use of powerful but compact units designed for outdoor use also reduces the need for cooling, as would have been required in an indoor environment.

Standalone move
While 5G networks around the world are currently based on non-standalone (NSA) technology, Yang believes meeting the goal of delivering advanced use cases to enterprises will require network slicing of standalone (SA) networks.

With this market in mind, Huawei has developed a number of specific products designed to ensure delivery of highly reliable coverage.

Among these are its Super Uplink solution, which coordinates TDD and FDD spectrum to increase user uplink experience by up to four-times, and various network slicing tools.

Network slicing, Yang noted, would become a critical component for operators as many vertical industries do not have the “economic scale” to deploy a private network and will have to rely on operator supplied services.

Yang noted the solutions presented for 2020 were the tip of the iceberg when it came to 5G innovation, with a wide range of equipment available and many more in the pipeline.