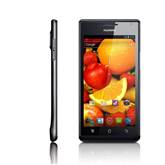 Huawei announced availability of its Ascend P1 LTE smartphone, describing it as “the device compatible with the highest number of frequency bands”. As previously announced, it will initially be available in the UK through Everything Everywhere, with other markets set to follow.

According to the Chinese company, Ascend P1 LTE is being tested on operator networks across Europe, Latin America, North America and Asia Pacific regions. It is powered by a 1.5GHz dual-core processor, and runs Android Ice Cream Sandwich.

Earlier this year, Huawei revealed aggressive smartphone targets for 2012, looking to ship 60 million devices – compared with 20 million in 2011. Much of the growth will come from its home market, as customers transition from smartphones to feature phones.

The company is already offering a non-LTE version of the Ascend P1 worldwide, and has created a TD-SCDMA market for China Mobile.