Huawei opens up further on 4.5G 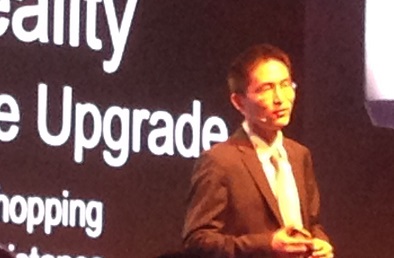 At the vendor’s pre-MWC 2015 analyst and media briefing in London this morning, he claimed this represents “the big, big change”.

The executive noted the changes need in the network necessary to support the evolving nature of connectivity, underpinned by the growth of the Internet of Things. These include shorter latency (cut from 50ms in current networks to 10ms in the future) and a boost in capacity to support 100,000 connections per cell (a 100 times increase over 4G).

And, unsurprisingly, speed will be a major factor. Ding said that while 4K video is likely to be an important feature of fixed networks, in the mobile space the focus will be on 2K. But this will require an increase in download speeds from 8Mb/s for HD to 45Mb/s for 2K.

“Video performance has become a key benchmark for the network,” he observed.

Bob Cai (pictured), VP of marketing for Huawei’s wireless unit, said that “4.5G we think is a smooth evolution of 4G, like HSPA+ in 3G times”. The plan is to commercialise products next year, positioning 4.5G around half-way on the timeline between 4G LTE and 5G.

As part of the evolution path, he said that new technologies forming part of the roadmap include massive MIMO, massive carrier aggregation, licence-assisted access (LTE-U) and 256QAM modulation.

Cai also said that 4.5G will “make cellular IoT possible”, via a technology specifically tailored to this use case – LTE-M. This will support the massive increase in the number of connected devices, while providing better coverage (receivers require 1/100th of the signal power of existing 2G systems), using low power terminals (10 year battery life).

The 4.5G update came as Huawei unveiled what it described as “its vision for the ICT industry”, using the tag ‘Open Roads’. And Roads is an acronym based on “a new pattern of traffic consumption featuring five fundamental characteristics: real-time, on-demand, all-online, DIY and social”.

The company showcased its work in a number of areas, including the progress it has made with its SoftCOM strategy, which uses technology such as NFV, SDN and cloud computing to drive network evolution, and showcased a high-throughput router designed to support the era of “FMC2.0” – fixed and mobile networks and content.

Also presented at the event was its FusionCloud Omni Solution, enabling interoperability between public and private clouds and serving as a hybrid-cloud self-service system.