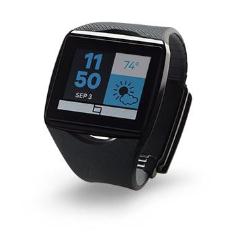 HTC has shelved its anticipated smartwatch, with Pocket-lint suggesting that “rising costs and a lack of wow factor” had taken their toll.

According to the report, HTC’s device was based on Qualcomm’s Toq (pictured), a device unveiled last year and intended to show the potential of the silicon vendor’s various technologies in the wearables space.

But since then a number of vendors have jumped on the bandwagon with new Android Wear (and in the case of Samsung, Tizen)-powered devices, during which time the HTC project has lost momentum.

With Samsung, LG, Asus, Sony and Motorola all announcing new products recently, competition in the smartwatch space is already tough.

But as yet it is not clear how big the market for smartwatches is, not least because of a lack of certainty about the use case for what is essentially a costly smartphone peripheral.