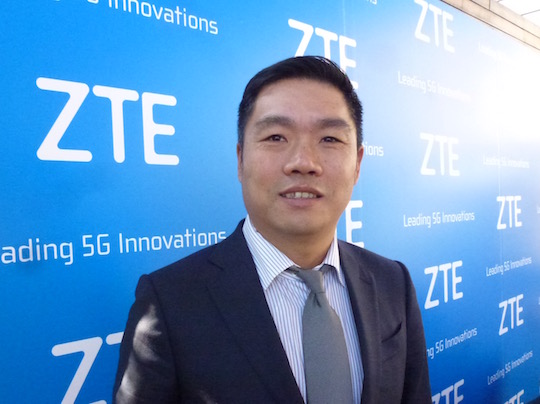 Chinese equipment vendor ZTE is confident demand for 4G networks will continue to expand, even in China, and is adding features to its 4G kit to boost operators’ efficiency and bridge the gap to 5G.

Zhang Jianguo (pictured), ZTE SVP and head of wireless products, told Mobile World Daily that by bringing pre-5G technologies, such as massive MIMO and beam-forming, into today’s 4G networks, it is helping operators expand capacity and reduce costs, while at the same time testing the maturity of 5G features.

He gave the example of its new TDD-LTE massive MIMO 2.0 release, which increases capacity by three times and decreases the footprint by 40 per cent.
With its pre-5G kit, he said operators don’t need to add new sites or frequencies. “They don’t have to change anything – they can use their existing sites, so it’s attractive to CTOs as well as CEOs and CFOs.”

The Shenzhen-based company also released a range of pre-commercial 5G mmWave and sub-6GHz base stations and will demonstrate at Mobile World Congress 2017 a peak rate of 50Gb/s using a 5G mmWave base station.

Zhang said ZTE will continue to focus on its existing customer base in China, Asia and Europe, but it is also looking to attract new mobile operators by showing off it technical capabilities in pre-5G.

Despite China’s three mobile operators having installed three million 4G base stations, he said 4G demand is still growing and expects 4G growth in the country to be stable for the next two years. “China has 700 million 4G subscribers, but there are still a lot of 2G users, so we’ll see continued growth for a couple of years.”

Outside of China, he doesn’t expect to see a drop in 4G investment for at least a few years. He said its addressable market for its 4G and pre-5G gear is expanding, as its picked up new customers last year in a number of countries, including Wind 3 in Italy and SoftBank in Japan.

The company is also adding more tier 1 customers, he said, with half of 60 new 4G, pre-5G and virtualisation contracts in 2016 signed with tier 1 operators.