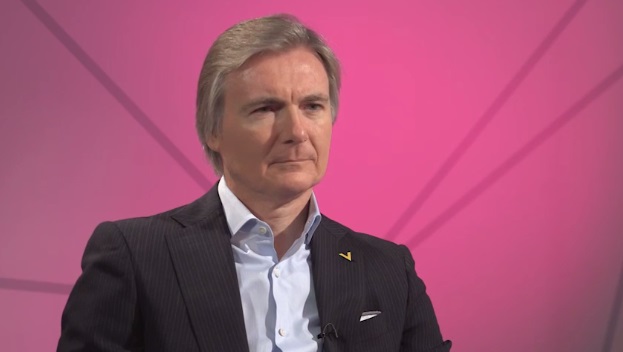 Veon talked up the positives for Q1, stating it had reached “several major milestones” in the period, during which it rebranded from VimpelCom.

“We announced a sustainable and progressive dividend policy and paid final dividends for 2016. In addition, we accelerated our digital strategy, with the rebranding of the company as Veon,” said Jean-Yves Charlier, CEO (pictured).

The company reported a loss of $4 million for the period, compared with a prior-year profit of $187 million, on revenue of $2.3 billion, up 13.1 per cent. Last year’s period benefited from a $196 million profit from discontinued operations, related to financial gains ahead of the Wind/3 Italy merger.

Veon said revenue benefited from currency gains and its Warid deal. Organically, revenue decreased by 1 per cent, due to weakness in Algeria and fixed-line woes in Russia, partially offset by strength in Pakistan, Ukraine and Uzbekistan.

In Russia, total revenue organically declined by 2.1 per cent to $1.1 billion, mainly due to Veon’s fixed business. Mobile service revenue increased by 1 per cent driven by mobile data, value added services and interconnect revenue, partially offset by declines in voice.

In Pakistan, the merger of Mobilink and Warid was completed, and as a result, Warid’s financials have been consolidated into Veon’s financials from 1 July 2016. Total revenue grew by 5 per cent to $370 million, supported by “growth in all revenue streams”.

Algeria was a weak spot. Revenue declined 15 per cent to $232 million, as the Djezzy business faced customer churn and ARPU erosion, the latter made worse by price competition. It expects this trend to continue, and it will “take time to stabilise its commercial proposition and its customer base”.

Maintaining momentum
Charlier said: “The positive momentum of 2016 is continuing into 2017 while our Italian joint-venture also had a positive start into the year, with solid revenue growth and synergies on track.”

Veon also noted 4 April marked its first day trading on Euronext Amsterdam, alongside its Nasdaq Global Select Market listing. It described the move as logical, “given the company has had its headquarters in the Netherlands since 2010 and now employs a workforce of over 500 people in Amsterdam, comprised of a mix of digital, technology, engineering, legal, finance, marketing, policy and communications personnel”.

The free-float of Veon shares also increased, following Telenor’s sale of a part of its stake.