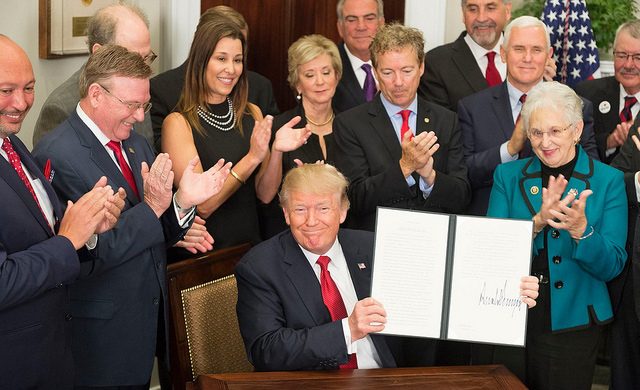 US President Donald Trump (pictured, centre) laid out a plan to increase 5G spectrum sharing between government and private users, as part of a proposed $4.8 trillion budget for the country’s fiscal year 2021 (to 30 September 2021).

The proposal would give the National Telecommunications and Information Administration (NTIA) authority to negotiate spectrum sharing arrangements and lease government airwaves to private companies for commercial use.

Operating in conjunction with government-run spectrum auctions, the Trump administration said lease arrangements would “provide another option for maximising the economic value” of limited spectrum resources. The scheme was tipped to generate an estimated $670 million over the course of ten years.

The budget would also set aside $25 million for the NTIA to modernise management systems to “more efficiently satisfy industry’s need for additional spectrum” with the emergence of 5G.

Though Trump’s budget is unlikely to be passed by Congress in its current form, the document reflects the administration’s priorities, suggesting plans to expand on existing efforts to make federal airwaves available for 5G.

A spectrum-sharing scheme between private and government users in the 3.5GHz band received final approval from the Federal Communications Commission in January. An auction of licences in the band is set for June.

Trump’s budget also includes $14 billion for Department of Defence science and technology research into AI, 5G, and cybersecurity, among other things.