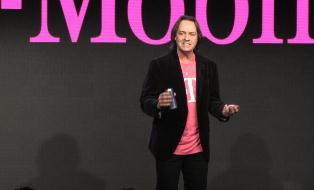 Fresh from bashing the exclusive smartphone arrangement between AT&T and Amazon, John Legere, the no-holds barred CEO of T-Mobile US, unveiled more initiatives designed to shake up the wireless industry at the operator’s ‘uncarrier’ 5.0 and 6.0 events. Among them is a free seven-day ‘test drive’ for customers wanting to check out the iPhone 5S and the T-Mobile US data network.

In what has become a familiar mantra, Legere said “buying blind” was another industry pain point that could only be addressed by uncarrier thinking,

“The way this industry forces Americans to buy wireless is completely, utterly broken,” he said. “I’m here to tell you there’s a better way. While the carriers ask you to buy blind, the uncarrier gives you transparency. Our network kicks ass, and now people can experience for themselves what a data-strong network can do with T-Mobile Test Drive.”

The offer, which comes into effect on 23 June, looks generous. Customers receive an iPhone 5s “fully loaded and ready to go” and can chew up as much data as they like for seven days. If they don’t want to buy the device (or data plan), they drop it off at a T-Mobile US store without obligation.

“The test drive offer resurrects an age-old concept in the US wireless market, one all the major carriers have long since put to bed, but it does it with a new twist, lending the customer a high-end device instead of signing them up for a contract on a trial basis,”  said Jan Dawson, chief analyst at technology consultancy Jackdaw.

“T-Mobile badly needs to convince the US population as a whole that its network has got better and is now very competitive in certain markets, and the best way to do that is to get live devices running on the network into consumers’ hands.”

T-Mobile US said it had expanded “Wideband LTE” into 16 markets, giving T-Mobile LTE devices a speed boost up to nearly 150 Mb/s (in a best-case scenario). Nationwide VoLTE is planned for the end of the year.

Dawson warns, however, that the test drive might backfire: “The downside is that for all the progress T-Mobile has made in major metropolitan areas, its overall network coverage still lags competitors significantly, and in-building coverage can be spotty even in markets where it does well outdoors,” he said. “Some people who try the test drive may merely confirm what they already suspect: that T-Mobile doesn’t cover their area very well.”

Shortly after the uncarrier 5.0 event, T-Mobile US announced some ‘uncarrier 6.0’ initiatives with an emphasis on music .

“As a committed music freak, I’m personally outraged at the way the other guys are using the music you love to lure you into overpriced plans with sweet ‘promotional offers’ that quickly roll into higher prices or trigger those absurd overage charges,” railed Legere.

Dawson applauded the music initiative as great marketing. “The genius is in the fact that video, and not music, is what really causes people to go over their data plans,” he said. “Zero-rating music services is therefore a low-risk strategy which will have relatively limited impact on T-Mobile’s costs while making for good marketing material.”

T-Mobile US also announced a deal with “internet music pioneer” Rhapsody. The two companies are introducing unRadio on 23 June, a new music service designed to eliminate pain points associated with traditional internet radio. There’s no ads, you can skip what you want, and choose your own music from a catalogue of more than 20 million songs.

Simple Choice customers can get unRadio for free, and it will be available at $4 per month for other T-Mobile US customers.