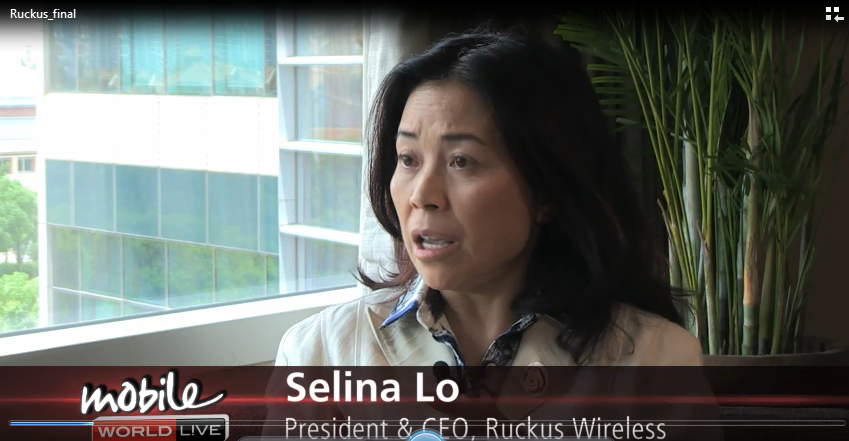 In the city of San Jose, which has deployed Ruckus’ WiFi kit, Lo told Mobile World Live that such a combination is improving quality of lives.

Having installed sensors for air quality, San Jose is combining that data with real-time traffic information and availability of public transport and parking. “By doing an analysis [of all the data gathered], residents can be given options on the best way to travel to work,” said the Ruckus boss.

There can also be economic benefits, argued Lo, simply by making free WiFi available in popular public locations. “By offering free WiFi in the downtown area you can draw people away from hotel rooms, encouraging them to go to restaurants and so on,” she said.

Another benefit of widespread WiFi, said Lo, is that cities might attract more convention business. Digital signage and smart meter connections are other advantages.

Lo is keen to emphasise, however, that Ruckus does not only provide WiFi infrastructure but has its own involvement in big data analytics.

At this year’s Mobile World Congress, Ruckus launched SPoT, its cloud-based location service. As well as recording the movement and location of devices that have WiFi switched on, SPoT can also provide analytics on the data gathered. Network operators might use that information, for example, to offer location-relevant content and retail deals to users.

As far as the company’s carrier WiFi business is concerned, Lo said she had seen “great traction” in the last 12 months, both from mobile and fixed-line players. She also predicts 2014 will be the year of Hotspot 2.0 implementation, with the likes of Boingo, Time Warner Cable and Orange Poland having already made big moves on the technology.

Hotspot 2.0 is focused on enabling a mobile device to automatically discover APs that have a roaming arrangement with the user’s home network and then securely connect, much like the cellular experience.

“Soon we’ll start to see roaming services between carriers and WiFi users won’t need to log on,” said Lo. “They’ll be automatically able to get onto WiFi whenever they want.”